Air Fryer Bacon Wrapped Shrimp are made with just 2 ingredients but they’re so tasty. Plus, we’ve got the one tip you need to cook them perfectly.

I’ve made bacon-wrapped shrimp a bunch of times. They’re delicious. My complaint though has usually been that either the bacon isn’t crispy or the shrimp seem tough and overcooked. Well, I have solved this problem forever!

How to Avoid Overcooked Shrimp

You see, on my website COOKtheSTORY I’ve posted my favorite method for cooking shrimp that turns out perfectly, and it’s to cook shrimp straight from frozen. The way I do it is to bring a pot of water to a boil and then take it off the heat. Once it’s off the heat, you add the frozen shrimp and let them sit in the no-longer-boiling water for 6-10 minutes (it depends on the number of shrimp and their size). The shrimp turn pink when they’re done. They end up really plump and flavorful, and I think it’s because the water cooked them so gently.

It therefore occurred to me that maybe the solution to bacon-wrapped shrimp is to use frozen shrimp. That is, to not thaw the shrimp before cooking them. The idea is that it will take a little bit longer for the shrimp to cook, thus giving the bacon more time to crisp up.

And it works! The bacon ends up crispy and the shrimp are perfectly cooked. Shazam!

How to Wrap the Bacon

There are other perks to this method as well. It turns out that frozen shrimp are way easier to wrap in bacon than thawed shrimp are. They’re firm and not floppy so it’s easy to get the bacon wrapped around. And, the cold seems to transfer a bit to the bacon, holding it in place.

Have a look at the below images to see how to wind the bacon around the shrimp.

I like cooking these in the air fryer. You can do it on a sheet pan in a regular oven set to 400°F though. It will just take a little longer though, about 20-25 minutes. 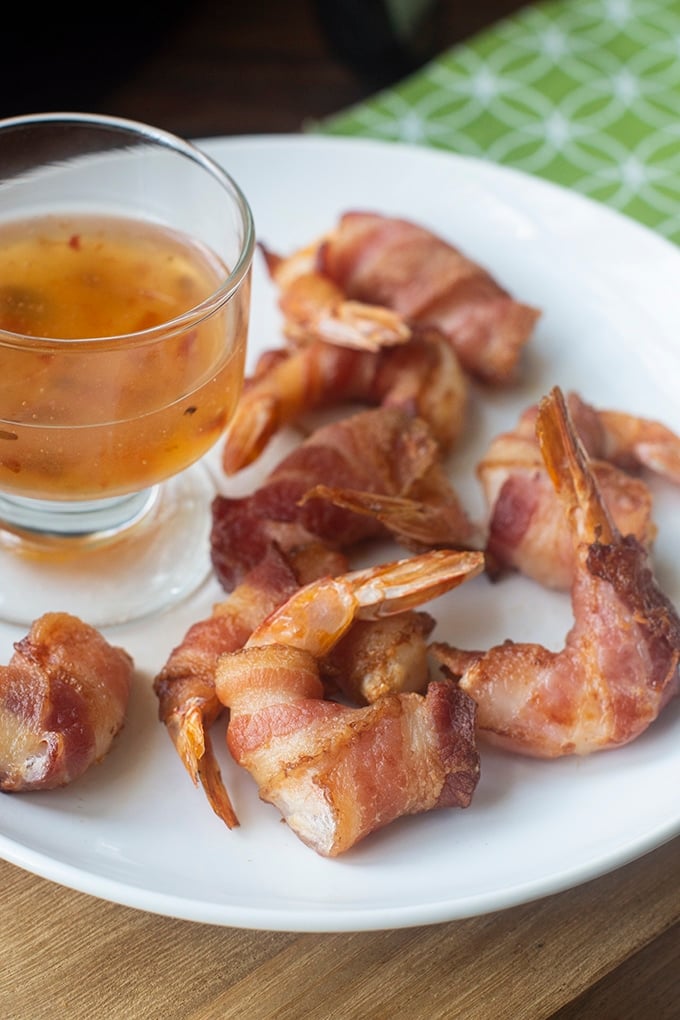