Baked Potato Bites are the perfect appetizer to serve guests. They’re hearty and can be made ahead of time.

Everyone loves baked potatoes, right? In my opinion, when you find something that everyone loves, you NEED to turn it into an appetizer. That’s how these baked potato bites were born.

I really like these as a hearty appetizer for when people are coming over and I want to know that people are satisfied while I finish making dinner. Potatoes are nice and filling and do the trick really well.

There are two things that I want to tell you about this recipe. First, I serve these potato bites at room temperature. Why is that? It’s so that I can make them ahead and have them ready whenever. Also, I find that the sour cream melts into a puddle around the potatoes if I try to serve them warm. If you really want to serve these warm, I’d skip the sour cream and instead melt some cheese onto the potatoes before serving.

The second thing, well, I know you’re asking, “What gives with the asparagus??? Asparagus doesn’t usually show up on baked potatoes!!!”

I know that, and I agree with you. But, asparagus and potato go really well together, and I wanted to add a bit of healthiness to these. You can absolutely skip the asparagus and go with finely chopped chives or green onions though.

If you’re going to go with the chives or green onion instead of the asparagus, you’ll save a bit of time. The other thing you can do to save some energy is buy bacon bits instead of crisping your own bacon. And, another thing you could do is cook the potatoes in the microwave. Head over here to learn how to bake potatoes in the microwave. For these small potatoes, the time will be much shorter but the method is the same.

The printable recipe for the baked potato bites is below. I hope you love them as much as I do! 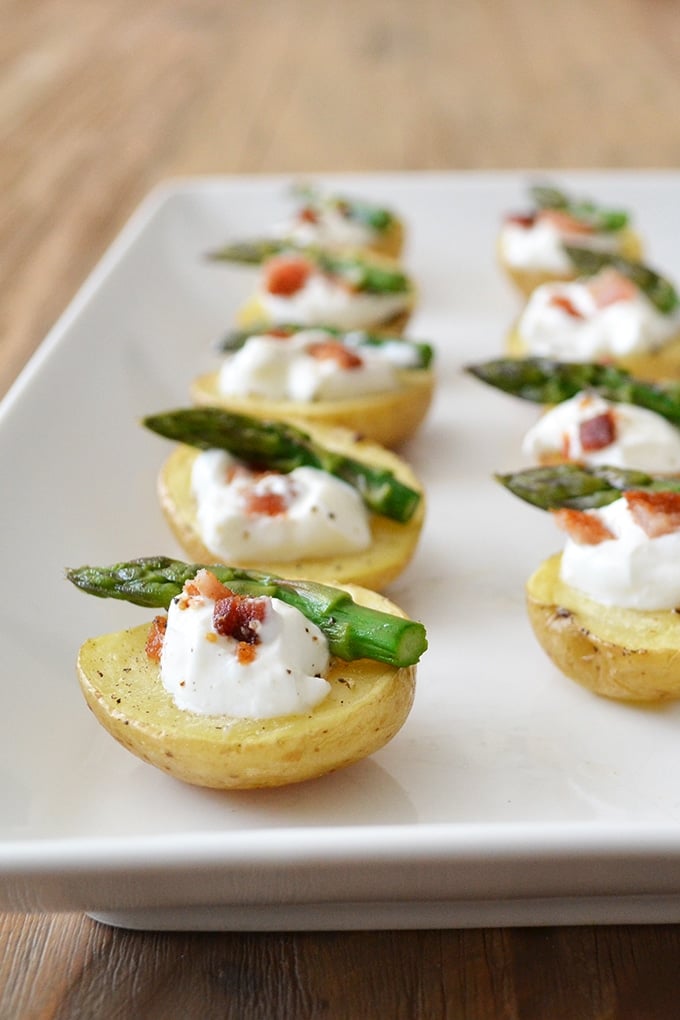