Baked Potato Pizza is exactly what it sounds like. It’s pizza topped with baked potato and the works. It’s so tasty you’ll want to make it again and again.

Baked potatoes and pizza are two things you most likely never think to combine, but when you do, it creates such an amazing treat. Baked Potato Pizza is full of comforting flavors that you and your family will want to make it again and again.

How should you cook the potatoes?

You’ll want to have cooked potatoes ready to put on the pizza so there are a few ways that you can make them.

What kind of potato should you use?

It’s usually recommended that you make baked potatoes with russet potatoes since they are nice and starchy which leads to a fluffy middle when baked. You really can use any type of potato that you have on hand though. It would be great with red skinned potatoes if that’s all you have on hand.

How thin should you cut the potatoes?

To make sure the pizza isn’t too heavy and that you’ll have enough to cover the entire pizza, cut them into 1/4 inch slices. It leaves enough that you’ll get the texture without weighing down the pizza dough.

Do you need to make the pizza crust?

You can use whatever pizza dough or crust you’d like. Feel free to use an already baked crust, buy a ball of pre-made pizza dough, or favorite pizza crust to pre-bake. You can also make your own pizza dough using this recipe from our sister site, Cook the Story.

What can you top the pizza with?

Think about all the great toppings you put on a loaded baked potato. Sour cream, cheese, bacon, and green onions are the simple ingredients to make it taste like a classic. You could try adding ranch to the sour cream for a different sauce or even topping with jalapeños to add a little spice. 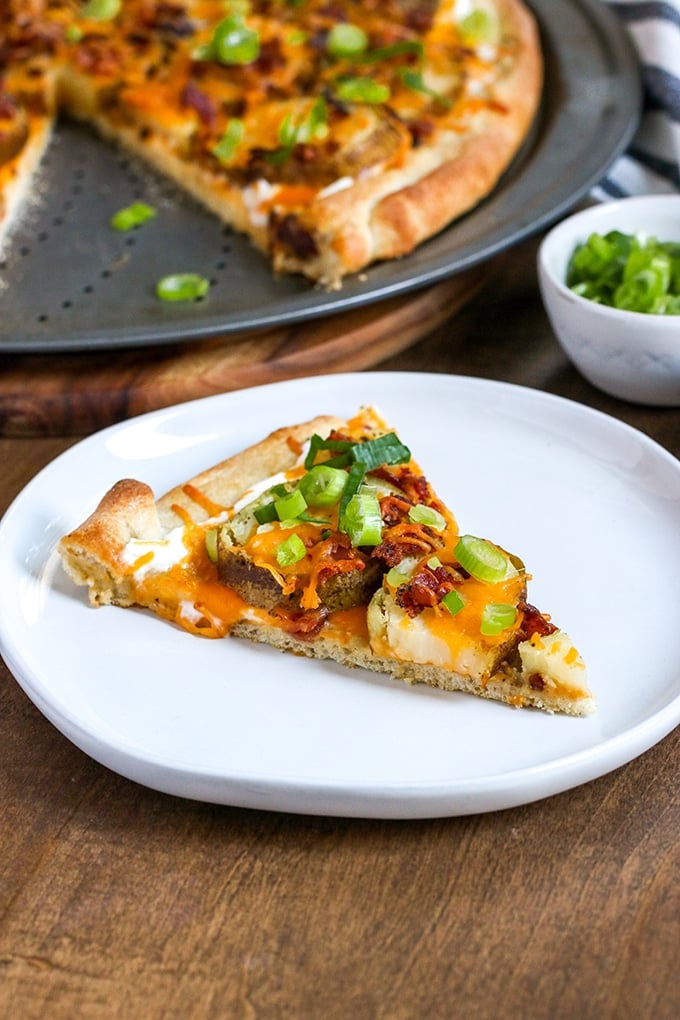