There are so many types of potatoes and ways to cook them that they are practically their own food group – mashed potatoes, baked potatoes, Hasselback potatoes, hashbrowns… the list goes on! And given so many cooking methods, it’s hard to master each and every one. Lucky for you, we’ve shared how you can make the perfect potato for almost every occasion, and now I’ve perfected the baked potato skin to add to your list.

Choosing and Prepping the Potato

Let’s start with the potato itself; russet potatoes are the ideal spud to use for potato skins – they are strong, have thick skins, and don’t have an overpowering flavor so the toppings can really shine through.

After the type of potato, the crispiness of the skins is key. There are a few steps to getting them just right – rubbing the entire potato in olive oil before baking and then brushing the insides and outsides with butter during the second bake ensures just the right amount of crispiness. I recommend using a silicone basting brush like this one.

But even if we have the right potato and the ideal crisp, baked potato skins are nothing without toppings. Make sure you load them up with your favorite cheese, bacon, sour cream, and green onions. Resist giving them a sample before you serve because the plate might be empty by the time it hits the table. They’re that good. 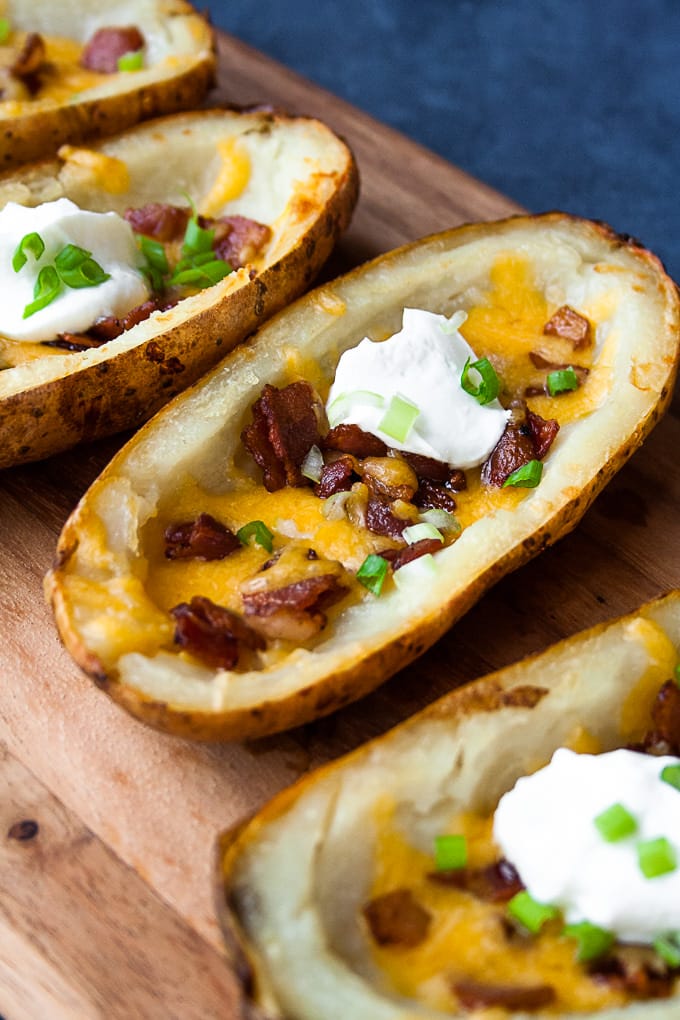 When not working full time as an engineer, you can find Ellie in her kitchen and blogging at Hungry by Nature. Her approach to food is simple – eat healthy, whole, natural foods and always leave room for dessert! While seasonal, healthy foods are a top priority, Ellie has also been known to eat ice cream for dinner. It’s all about balance!