Cauliflower rice is a super-star trend that we totally love so we’re doing a big series all about it. Follow along with us as we dive into this delicious food.

A couple of years ago, cauliflower became super duper trendy. It was all over Pinterest and everywhere. This staple vegetable that we’d taken for granted all our lives was suddenly a star. Some time after that, cauliflower rice hit center stage. There were recipes using it in all kinds of ways until, finally, brands caught on and started pre-ricing the cauliflower for us. Now you can buy cauliflower rice in the produce department and in the freezer section of the grocery store, making it easier than ever.

Which is, I believe, why the cauliflower fanfare continues to grow.

And which is, also, why we’re doing a whole big series about cauliflower rice right here on TheCookful starting today.

Wait…Have you tried cauliflower rice? Do you know what it is? Better fill you in quickly.

Cauliflower rice refers to cauliflower that has been grated or cut into very small, rice-sized pieces. It can also mean a finished dish that is made by cooking those soft pieces of cauliflower into something resembling white rice. You serve it as a side dish similar to rice or you use it as a replacement for rice in recipes.

Riced cauliflower is also sometimes called Cauliflower Crumbles. This is a term that has been trademarked by Green Giant though so it’s brand-specific.

The main idea behind cauliflower rice or riced cauliflower is that it can be substituted for rice or other carbohydrates in many recipes. It can be used in fried rice or taco bowls. Anywhere that you have cooked rice, really. Cauliflower rice also gets used instead of flour in baked items, like pizza crusts and garlic bread. We have a whole bunch of recipes using cauliflower rice, including fried rice, rice bowls, pizza crust and more, coming up for you so stay tuned.

There you have it, some cauliflower rice explanation and information to kick off our new series. It’s going to be a really interesting and delicious one so I invite you to come back often and see what we’re up to with it. 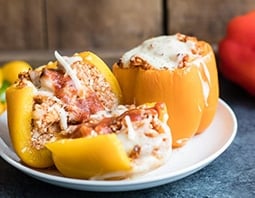 How To Rice Cauliflower 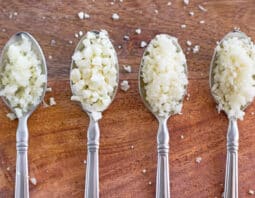 These days you can buy already-riced cauliflower at the store. But if you've got a head of cauliflower and want to do it yourself, here are two great ways to do it.