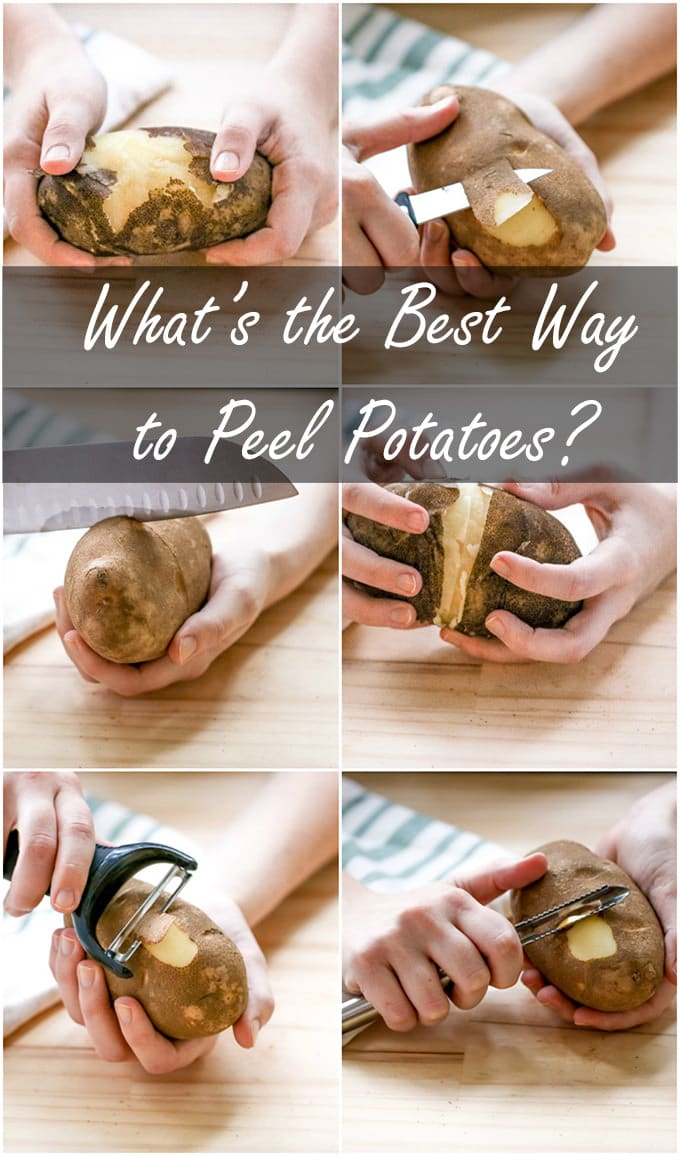 How to Peel Potatoes

With Mashed Potatoes begging to be made, the question has to be asked: What is the best way to peel a potato?

I know there are a number of ways out there to do this that people swear by, but I decided on five ways to test: the straight peeler, Y-peeler, paring knife, score and boil method and boil then peel method (which we also mentioned in our how-to for boiling potatoes). Let’s jump right in.

Regardless of the method you choose, you absolutely need to wash your potatoes beforehand. Most potatoes are never properly washed from when they’re harvested so they still have dirt on them. Use a vegetable brush to really help you get rid of any dirt that’s set in the shallow eyes. If you’re able to, wash the potatoes with enough time for them to dry before you peel them. This will make sure they aren’t as slippery when you’re holding them. If you don’t have time to let them dry, use a clean dish towel to dry them and/or to help you hold them.

The straight peeler shown isn’t the same as most swivel style peelers, but it performed about the same as one would. The straight peeler (like this one) is one that I see most often as it’s probably the most traditional besides a paring knife. The motion you create with it feels much like that when you use a paring knife to peel. It goes front to back without much range of motion. It definitely feels safer than using a paring knife and doesn’t take as much of the potato off when peeling. 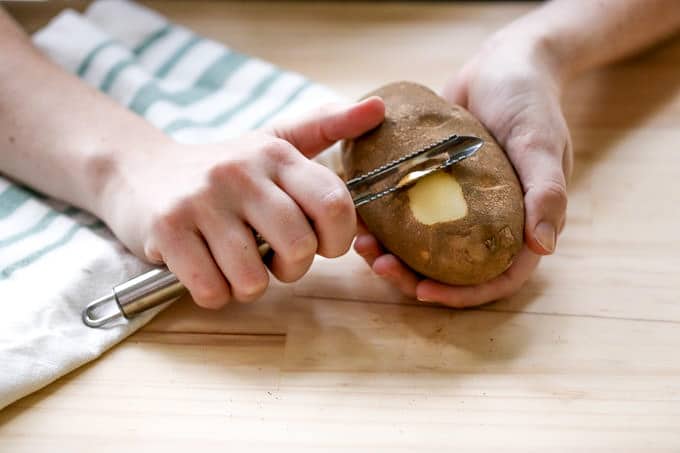 A Y-Peeler is the most comfortable to hold with the wider base. It also allows for more of a grip when you have wet or dirty hands. My favorite way to use this peeler is to hold the top half of the potato and peel away from my hand, peeling the entire bottom half of the potato, then holding this newly peeled half and peeling the other side. It feels the most balanced and the least like I’d slip and hurt myself. It’s smooth, quick and doesn’t waste a lot of the potato on the peels either. It also feels like you have a larger range of motion than say with a straight peeler or a paring knife. 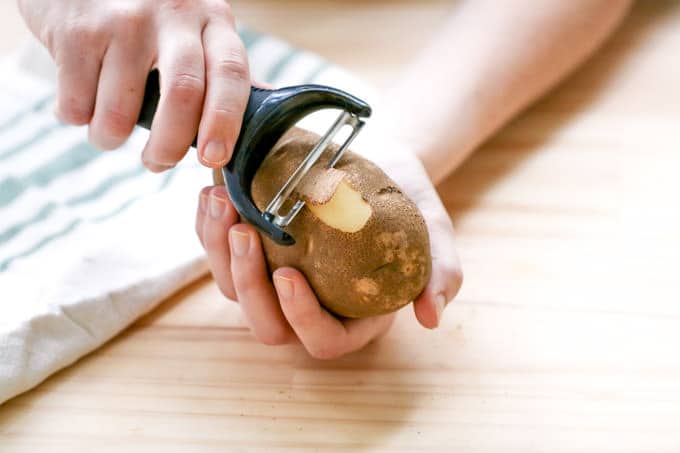 Using a paring knife feels like the most professional way to do this, but it also requires the most attention to avoid any mishaps. It’s pretty easy to end up digging too deep into the potato, not allowing a clean peel and creating jerking motions. This method ended up losing the most amount of potato on the peel for me, but with practice I can see that it could be a contender as a go-to method. 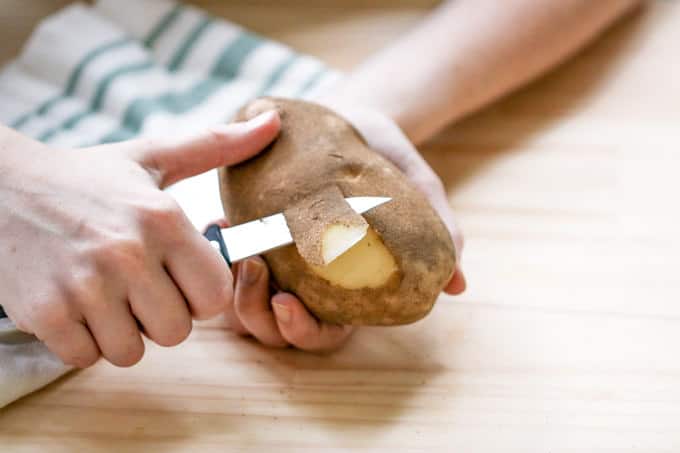 If you’re looking to save some time, use one of the above methods and cut your potatoes into small pieces. Place in chilled water and store until use so they don’t turn brown! This is best done when you use the potatoes within 24 hours. Perfect for the day before prep for holiday dinners!

If peeling before boiling isn’t your style or you just don’t have time, try this method. Score the potato down the middle, creating a ring around the potato. Boil until fork tender and each half of the peel should come right off. 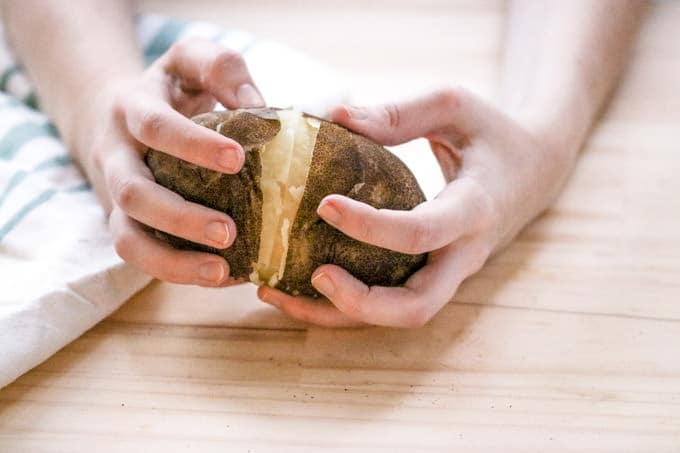 This method definitely works, but it isn’t the cleanest method. Boil these potatoes like normal and wait until they’re cool enough to touch. Use your fingers to pull back the peels. 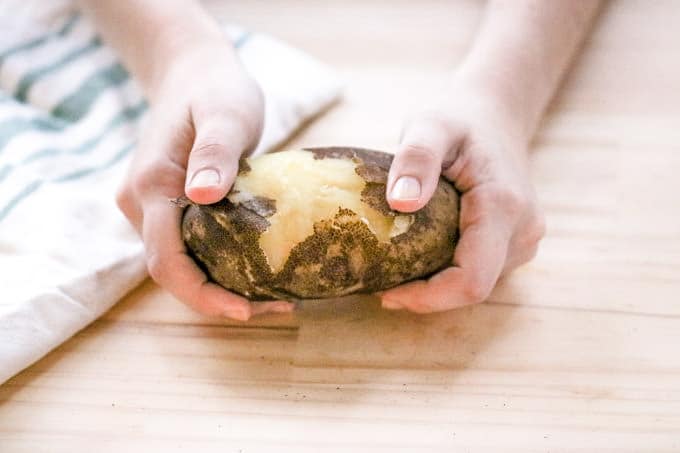 Without a doubt, for me at least, is this Y-Peeler. It feels more sturdy and balanced than a straight peeler.  It’s definitely safer than a paring knife so you can pass this job off to a younger member of the family if needed (but watch them because that peeler is still sharp!), and there is no risk of burning your fingers with the post-boiling methods. I also felt like either method that requires peeling after boiling never gave a clean peel. They mostly crumbled in my hand or the peels didn’t come off cleanly creating more frustration. In the end, just do yourself a favor and buy an early Christmas present for yourself!

We’re showing you the easiest way to peel potatoes – #TheCookful