Jewish holidays often call for specific, special foods. Learn about the major celebrations and what holiday foods you can expect to find.

For Jewish families, cooking has always revolved around the Sabbath and religious festivals. There are special foods for every kind of celebration. These range from the complete change in diet that Passover brings to less dramatic traditions such as ringing in the new year with sweet foods or eating hamantaschen at Purim.

Not familiar with the Jewish calendar? Here is a short description of the major holidays and festivals that are associated with food and how we celebrate them.

Shabbat is the Jewish sabbath which begins at sundown on Friday night and continues until sundown on Saturday night. It is intended to be a day of celebration and rest from the week. Therefore, in the past and even today, observant Jews abstain from performing many typical daily tasks on Shabbat. This includes cooking, as those tasks are considered to be “work.” As a result, in Jewish cuisine there is a tradition of long-cooked stews and braises. They are prepared on Friday afternoon and then kept in a low oven or other warm spot until it is time to eat them on Saturday.

The other traditional food for Shabbat is challah, the sweet, eggy bread that is often made into a braid or other decorative shape. For many families, eating challah on Friday night with Shabbat dinner is a time-honored tradition.

Rosh Hashanah, which means the head of the year, is the Jewish new year. Like many new year celebrations, it is joyous and festive. However, Rosh Hashanah also ushers in a solemn ten-day period of introspection, known as the Days of Repentance. This period culminates with Yom Kippur, the Day of Atonement, that is marked by a day-long fast.

There are many traditional Rosh Hashanah foods, often with symbolic meanings. The most common Rosh Hashanah tradition, and one that is consistent across the entire Jewish diaspora, is to eat sweet foods to symbolize the hope for a sweet new year. Ashkenazi Jews, for example, often begin the Rosh Hashanah meal by dipping slices of apple in honey. A special challah, made in a round shape instead of the usual braid, can also be dipped on honey on Rosh Hashanah as part of this tradition as well.

For many Jewish families, a braised brisket is the traditional main course for many holiday meals, including Rosh Hashanah.

Like Passover and Shavuot, Succot is an agricultural festival and is linked to the Exodus from Egypt. Succot comes close on the heels of Yom Kippur and marks the traditional time of the fall grain harvest. Some people think of it as a Jewish Thanksgiving.

The observance of Succot incorporates some charming customs. Families — or, more commonly these days, congregations — construct an outdoor temporary shelter, known as a Sukkah. These have an open, thatched roof, similar to the temporary shelters used during the ancient grain harvest, to commemorate the forty years that their ancestors spent wandering in the desert without permanent homes. Decorating and dining in the Sukkah is part of the holiday’s observance. The second important ritual of Succot is waving two special items while reciting a special blessing. This first is a cluster of branches, taken from a date palm tree, a willow, and a myrtle, which is known as a lulav. The second item is a large citrus fruit, known as an etrog.

Hanukkah is the Festival of Lights. It commemorates the victory of a small group of Jews, the Maccabees, over the army of the Syrian-Greek King Antiochus in the second century BCE. After the Jews drove the Greeks out of Judea, they attempted to restore their temple, which had been destroyed in the war, only to discover that there was just enough oil to light the lamp that held the eternal flame for one day. The story is that a miracle occurred and the small amount of oil lasted for eight days, which was how long it took to make new oil. That is why Hanukkah lasts for eight days.

It is traditional therefore to celebrate the holiday by eating food cooked in oil. In Israel, they eat jelly doughnuts called sufganiyot, and Sephardic Jews make dough fritters called bañuelos, that are like beignets. The most well-known Hanukkah food for Eastern European Jews are potato pancakes called latkes that are traditionally served with applesauce or sour cream.

Because Hanukah usually falls close to Christmas, many Jewish families also bake cookies for Hanukah, just as their neighbors bake Christmas cookies. One favorite Jewish cookie that you often see at Hanukah is rugelach.

Purim is the Jewish carnival festival. It commemorates the salvation of the Jewish people in ancient Persia from an evil government minister, Haman, who planned to destroy them. The story begins when King Ahasuerus sets aside his queen Vashti and marries the beautiful Esther who, unbeknownst to the King, is Jewish. Haman, the King’s most important minister hates the Jews because they refuse to bow to him and plots to kill the Jewish community in the kingdom. Esther reveals to the king that she herself is Jewish and exposes Haman’s plot. The king orders that Haman be hanged on the very gallows he built for the Jews and the Jewish people are saved.

Jews celebrate Purim by reading the book of Esther, which is in the form of a megillah, or scroll. This is a noisy business, because everyone boos, hisses, or shakes groggers whenever the name of the villainous Haman is mentioned. Congregations encourage their members to come in costume to hear the reading of the Megillah. This has led some to call Purim the Jewish Mardi Gras. (It is often around the same time of year as that other carnival holiday.) Eating, drinking — to excess even — and generally making merry are all part of the Purim festival.

Among Jews of Eastern European descent, the signature food for Purim are triangular cookies filled with jam or poppyseeds called Hamantaschen. Another Purim tradition is the giving of edible gifts called michlach manot.

Passover, which commemorates the Jews’ exodus from Egypt in the time of the Pharaohs, is one of the most important periods in the Jewish year. Indeed, Passover is the most widely celebrated holiday among the Jewish people. The center of the festivities is a ritual meal, usually observed on the first two nights of the eight-day long holiday. This meal is called a Seder, a word that means “order” in Hebrew. The Seder participants follow a prescribed order of rituals and ceremonies, many of which incorporate symbolic foods, that is set forth in a special book called a Haggadah.

During the eight days of Passover, observant Jews are forbidden to eat any foods containing chametz. These are foods made with wheat, rye, oats, or barley (except for matzah, a flat, cracker-like bread) as well as any leavened foods. These restrictions have given rise to an entire culinary sub-tradition of Passover foods. Some incorporate matzo, such as matzo ball soup, matzo brei, and matzo meal pancakes. Others simply rely on alternate ingredients or forms of leavening, such as desserts made with coconut, beaten egg whites, or nut flours.

Coming fifty days after Passover is Shavuot. It means “weeks” in Hebrew and commemorates the day God gave the Torah, including the Ten Commandments, to the nation of Israel at Mount Sinai. It also serves as marking the Biblical wheat harvest. There are no specific requirements for celebrating Shavuot — unlike the many required observances for Passover. There are however many minhagim, or customs, associated with the joyous festival.

One of the primary customs, particularly among the Ashkenazi, is the consumption of dairy foods. The origin of this tradition is not entirely clear. It may simply be that Shavuot occurs during the spring, which is the season when cows calve and give milk. The religious explanation is that once the Jews received the Torah, which laid out the kosher dietary laws, they could not eat any of their previously prepared meat dishes nor could they prepare any meat until they had cleansed their utensils. Thus, they were forced to eat dairy. Traditional Ashkenazi dairy dishes for Shavuot include cheesecake, noodle kugel, and cheese-filled crepes known as blintzes. 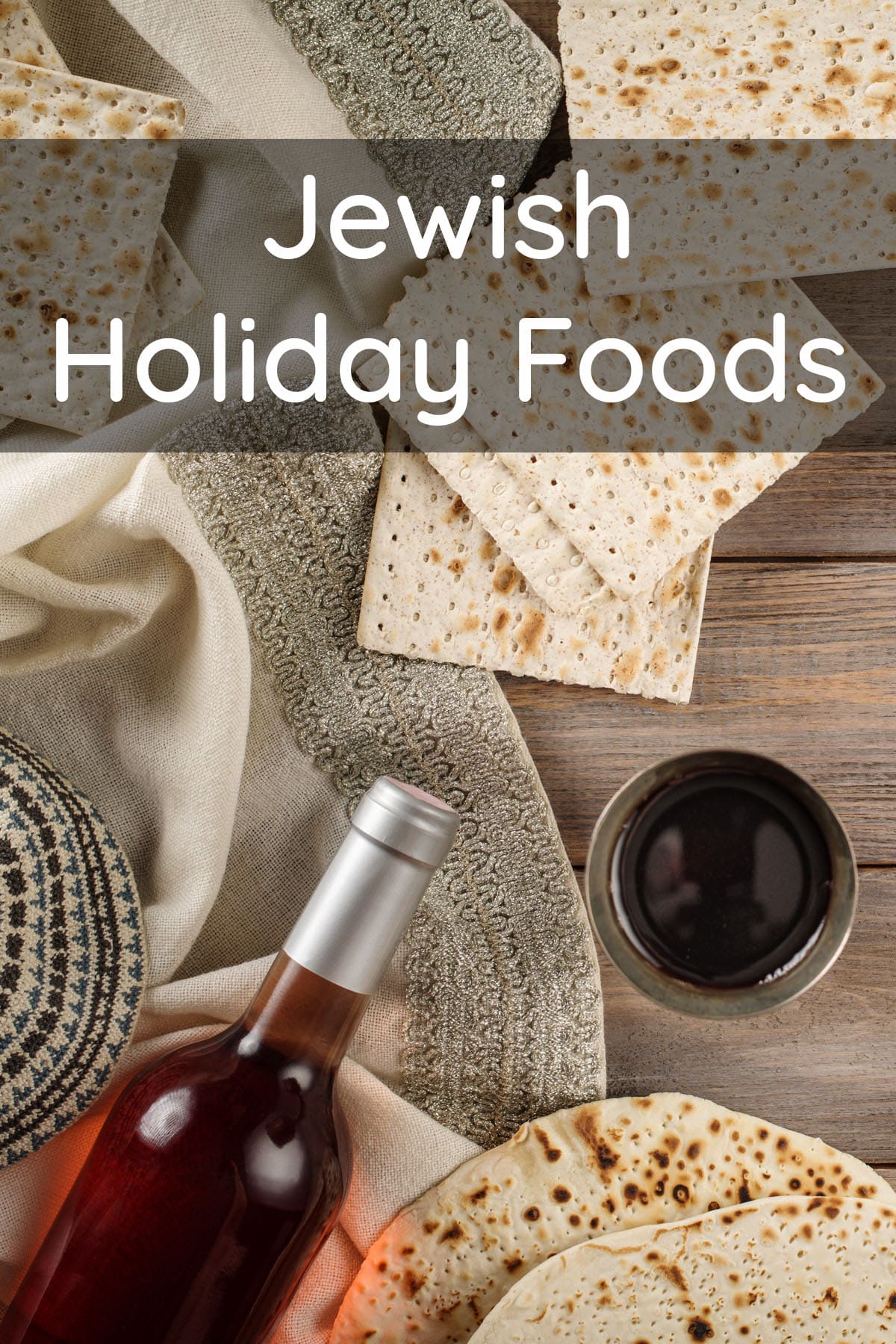