Loaded Baked Potato Soup sprinkled with your favorite toppings is a nutritious dinner the whole family will enjoy!

Potato soup just might be one of the most comforting foods ever made. There’s nothing quite like curling up with a steamy hot bowl of it on a cold day, or even on a warm day when you’re looking for a little coziness. I haven’t met anyone who doesn’t love it!

If you’ve never made your own baked potato soup from scratch, you definitely need to give it a try. If you can make mashed potatoes or Boiled Potatoes, you can definitely make this soup.

How to make the best loaded baked potato soup

Start by peeling and cubing a few potatoes. I like to use Russet potatoes because they have a high starch content, which gives the soup great body. They also have a really clean potato flavor.

Bring the potatoes to a boil in vegetable broth until they’re nice and tender. In a pinch, you can replace the broth with water, but broth adds more flavor. Just like with our Baked Potato Casserole, you don’t actually have to bake the potatoes for this recipe; it’s just called baked potato soup because it has the flavor of baked potatoes.

Once the potatoes are soft, blend them until they’re smooth. An immersion blender is great for this. If you don’t have one, you can also use a potato masher or just go at them with a heavy spoon – it shouldn’t take much effort to break them down.

At this point, the soup will look pretty watery. That’s okay. Thicken it back up with a slurry made by mixing together flour and water. A splash of cream will also help thicken the soup and round out its flavor. Finally, season the soup with plenty of salt and pepper.

What fun is potato soup without toppings? I love setting out a bunch of options and letting everyone customize their own bowl.

Some of my favorite toppings are: 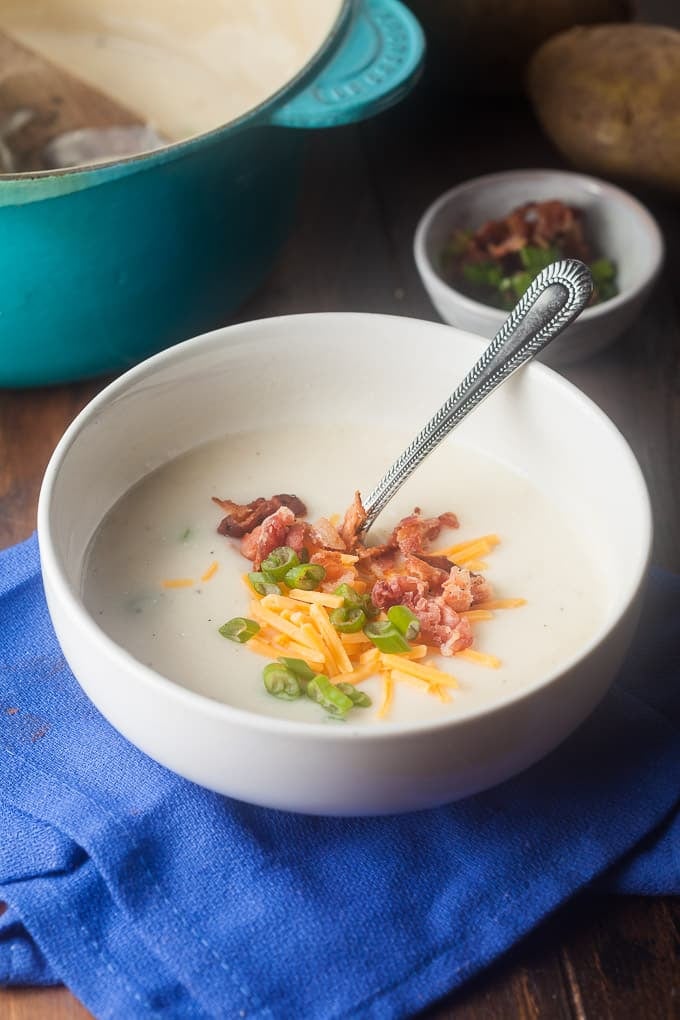