The best homemade hash browns are made with freshly shredded russet potatoes and are crispy and soft all at the same time.

I don’t know about you, but I could eat potatoes every day and not get tired of them. There are so many ways to make them, just look at this list of delicious potato recipes, and hash browns top the list for us because they are so easy to make. There are only a few ingredients, and if made right, there is so much happiness when you take a bite of these little crispy yet soft shreds of deliciousness.

Before I show you how to make them, there are a few key elements you need to achieve hash brown perfection:

The Potato. Russet potatoes are the best for making the perfect hash browns because they are higher in starch and contain less moisture. The second best choice is an all-purpose potato such as Yukon gold.

Texture. Hash browns should be nice and crispy on the outside, and the crispiest hash browns become that way because a good portion of the moisture has been removed from them.

The Pan. A skillet is the best way to fry these little shreds of potatoes. Choose one that heats evenly which results in well-browned and crunchy potatoes, like a cast iron skillet.

The Fat. Butter. What else is there to say? If you are vegan, olive oil is second best.

Do. Not. Stir. Don’t be tempted to stir too often. Let those potatoes sizzle away on top of the stove. Here’s how you make them….

Roll the potatoes up in the towel/cheese cloth and squeeze a few times over the sink to release the water. Remember, the drier the better.

Unravel the towel and set potatoes aside while the pan heats.

Spread a thin layer of potato shreds in a heated pan with melted butter or oil and sprinkle with sea salt and pepper. Let them sizzle. Even though it’s tempting, don’t stir.

When golden brown on the bottom, turn and let them sizzle some more – add a little more butter if necessary. 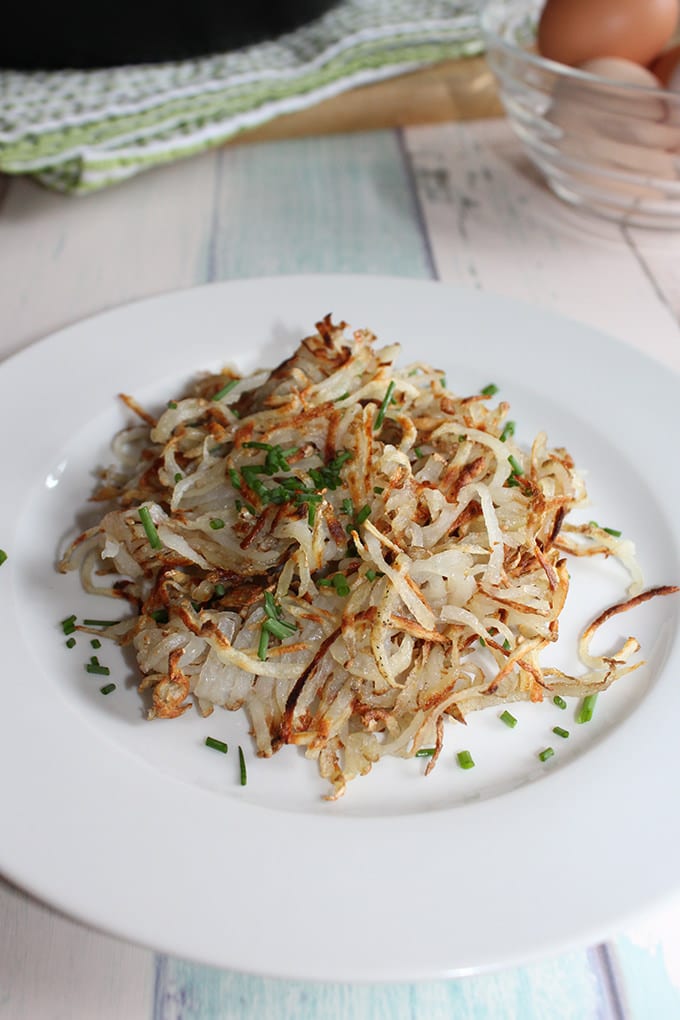 Anne is the creator of the food blog Simple and Savory where she shares easy, healthy recipes that are made with wholesome ingredients. When she’s not cooking, she loves shopping for ingredients at local farm markets. Even though her recipes are healthy, she believes that you have to indulge every now and then, and pizza is her favorite guilty pleasure!