One Pot Philly Cheesesteak Pasta is sure to be just as much of a hit as the iconic sandwich it’s named after.

One of the things I really love about the One Pot Pasta Formula is that it gives you a framework to be really creative and come up with new recipes. Take, for example, this One Pot Cheesesteak Pasta. It uses the same basic formula as One Pot Chicken Parmesan but tastes like a completely different recipe.

This might actually be my favorite one pot pasta creation yet. It has all the flavor of a really good cheesesteak – beefy steak and sauteed onions, with the addition of sauteed mushrooms and bell peppers – mixed into an almost mac and cheese-like base. It’s so creamy and delicious.

If you’re looking for a pasta recipe that’s a little less traditional, definitely give this one a try. You won’t regret it!

What goes on a cheesesteak?

Traditionally, cheesesteaks are made up of seasoned beef, sauteed onions, and plenty of gooey cheese. Bell peppers or mushrooms are also a really common addition, although some people argue they aren’t traditional and don’t belong on a good cheesesteak. I added them to this cheesesteak pasta because they go well in terms of flavor and because it’s an easy way to add a vegetable to this meal.

What kind of cheese should you use?

Traditional cheesesteaks are topped with Cheez Whiz, American, or provolone. For this pasta, provolone is definitely the way to go. It melts and browns really nicely while adding a sharp, slightly smokey flavor. This recipe also uses some cream cheese. It melts into the pasta, creating a rich, cheesy sauce. Using only provolone wouldn’t give the sauce enough body, so the cream cheese is essential.

What kind of pot should you use for this recipe?

You’ll need to put this pasta under the broiler to melt the cheese, so use a pot that’s oven safe. I like to use a cast iron Dutch oven because it goes from stove top to oven and is broiler safe. It’s the perfect size and shape for cooking the pasta and vegetables, and has plenty of surface area for that gooey cheese on top.

Does this pasta freeze well?

Yes! This recipe is great for making ahead and packing up for meal prep or freezing for another time. The pasta will soften a little bit in the freezer, but it will still be delicious. 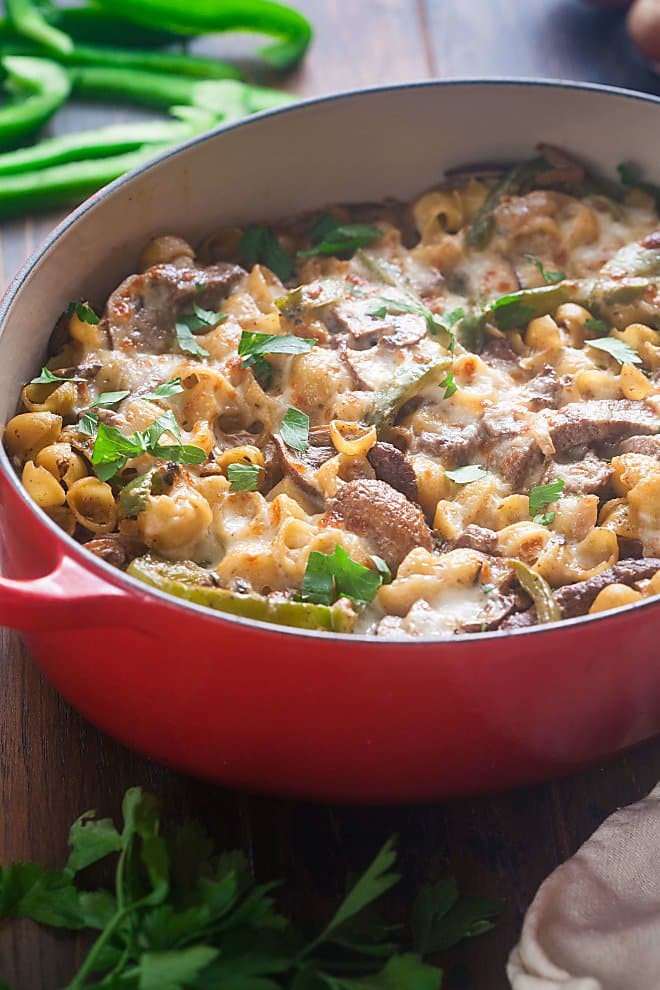 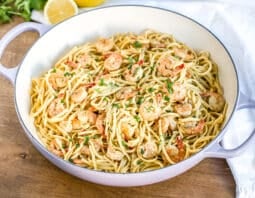