Poutine Baked Potatoes is another way to enjoy that iconic dish of French fries loaded up with gravy and cheese curds, and I’m showing you how to make it fast. Yum.

As a Canadian living in Florida I can tell you that one of the things I miss most is poutine. Like, you can get poutine anywhere in Canada. You can get poutine delivered to your house in the middle of the night. And, even KFC has poutine on the menu. Seriously!

Nowadays, when I get that late night poutine craving, I can’t order it in, nor can I wander down to a local diner and get my fix there. Thankfully, there are other things I can do to get that cheesy, gravy coated fix.

Here’s what you do. Poke the potato with a fork and then put it in the microwave until it is fork tender, usually 4-6 minutes depending on the size. While it’s cooking, pour some canned or jarred beef gravy into a microwave safe bowl and preheat your broiler.

A note about the gravy: Jarred beef gravy may seem inauthentic. Like, you should be using homemade gravy, right? But I’m pretty sure that most of the chip trucks and diners in Canada aren’t roasting beef to get the juices to make homemade gravy. They are mostly using a powdered gravy or the canned stuff. Therefore, if you buy a jar of gravy, your poutine will probably taste very similar to theirs.

If you have leftover homemade gravy though, or if you want to make your own from scratch, do go ahead. I have a gravy tutorial for you over here on my other website.

Ok, so you have a potato cooking in the microwave and you have some gravy ready to heat. Once the potato is done, cut it in half. It will be very hot so be careful. You might even want to wear oven mitts while doing this.

Then sprinkle the potato all over with salt and pepper. Then spray it all over with cooking spray, or use an oil mister like this.

Arrange the potato halves cut side down on a baking sheet and put them under the broiler just until the skin is crisping up a bit. Flip them over and brown the other sides.

While the potato is broiling, heat up the gravy in the microwave.

And get your cheese ready. If you’re lucky enough to have cheese curds, use those. They’re the best. If not, there are a few good substitutes. You can go with shredded mozzarella for sure. Or you can cut it into 1/4-inch cubes. That gets you closer to the curds texture. The other thing I’ve had success with is Mexican Queso Fresco, but be sure to buy the melting variety and not the crumbling variety.

Finally, it’s time to assemble the poutine baked potatoes. Arrange the potatoes on a plate, cut side up. Top with the cheese and then pour over the hot gravy. The heat from the potato and the gravy will slightly melt the cheese. Note that if you want your cheese really melted, add the cheese to the potato while it’s still on the baking sheet and then put it back under the broiler until the cheese is melted. Then add the hot gravy.

There you have it! A perfect midnight snack of carbs, gravy, and melted cheese. I hope that does the trick to your cravings the way it fixes mine!

If you want the cheese to be really melted, leave the potato halves on the baking sheet and top them with the cheese. Put them back under the broiler for a minute or two until the cheese is melted. Transfer to a plate and top with hot gravy. 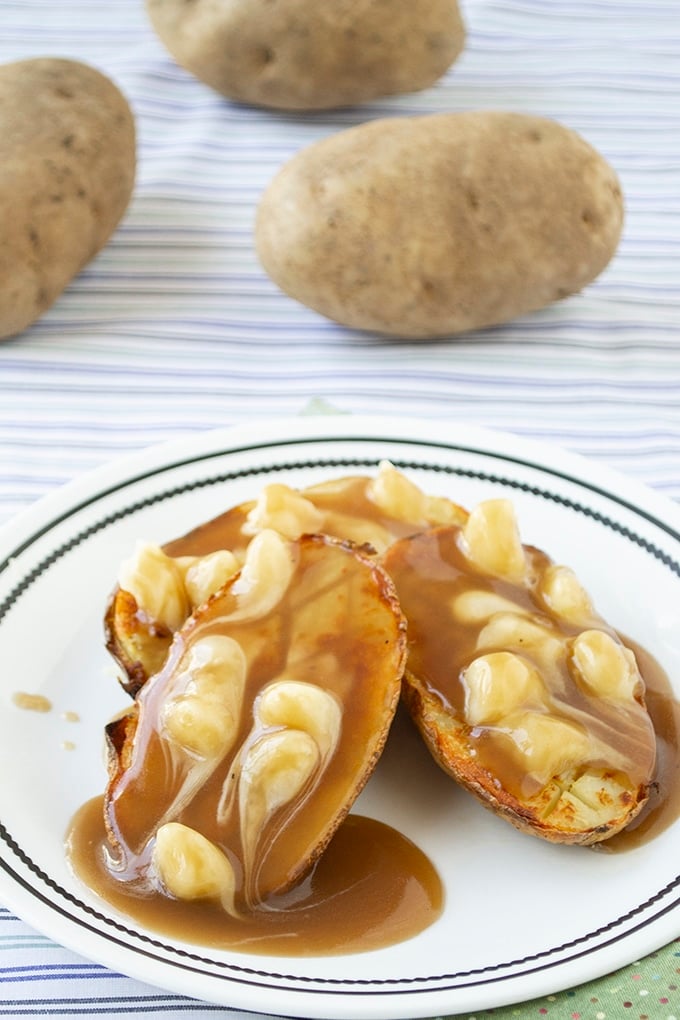