Slow Cooker Baked Potatoes are great when you want to prep dinner ahead of time and not have to watch it. They’re also great to serve a crowd. Baked potato bar, anyone?

Yes, it’s possible to bake potatoes in the slow cooker. This method makes the best moist baked potato you’ll ever have, but I need to warn you the skin won’t get crispy. Simply wrap them in foil, put in the slow cooker, and cook. The best part is you don’t need any water or any other liquid for baking. If you want to cook them with some meat, simply put the meat in the bottom of the slow cooker then place the foil-wrapped potatoes on top.

The best thing about this is that every method of cooking will give you a tasty baked potato that you can serve as a side dish.

What potatoes should you use?

Basically any type of potato is perfect for the slow cooker. You can use white, red, golden, yellow, or even sweet potatoes. I used russet potatoes for this recipe, which gave me a creamy, fluffy, and smooth baked potato. They’re definitely perfect for baking.

Can you use aluminum foil in the slow cooker?

Yes, you can! It will help potatoes to cook faster since aluminum foil keeps the heat in. It also helps keep them hot longer after removing the cooked potatoes from the slow cooker. Wrapping the potatoes with foil also gives you a fluffier moist texture on the inside of the potato and keeps the skin soft.

As I said above, if you are cooking something else with the potatoes you can simply place the foil-wrapped potatoes on top of the meat and other veggies. This will prevent the potatoes from getting soggy and mixed in with the other ingredients.

How do you know a slow cooked “baked” potato is done?

You should check your potatoes after 3 and a half hours. Check if they’re done by poking one with a fork or toothpick. If the potato is soft, it should be done. Remember that some potatoes will cook faster or slower depending on their size.

Smaller potatoes will cook quicker and bigger will require more time cooking. If you notice the potato is under-baked place it back in the slow cooker with the rest of the potatoes and cook them a little longer.

Here’s how to cook them in the slow cooker.

First, you need to wash the potatoes very well to remove any dirt. You don’t need to peel them but do poke them with a fork or knife. Poking the potatoes will allow steam to release from the potatoes while cooking. Rub potatoes with olive oil and season with salt, then wrap in foil and place in the slow cooker.

If you overcook the potatoes they’ll come out soggy, so check them after a couple hours to see how close to done they seem. If you want the potato skin crispy you can put them in the air fryer for a couple minutes at 400°F or under the broiler to crisp the skin.

Before cooking, you can also split the potatoes in half as this will reduce the cooking time to half. I didn’t notice any significant changes in taste or texture doing it this way. 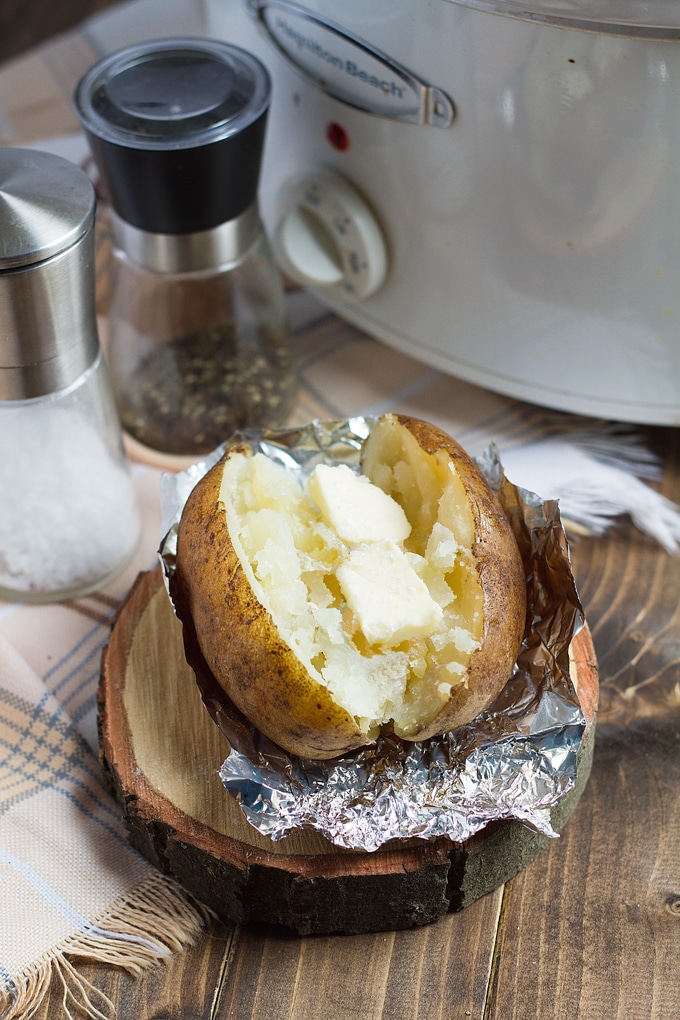 Ilona blogs at Ilona’s Passion where she focuses on sweet and savory party recipes. She believes in making recipes from scratch and not very sweet desserts. She likes to experiment with flavors while cooking in her Canadian kitchen. She has lived in three countries and loves to explore the world with her two boys and a husband. While not cooking or traveling she designs printable invitations and party decorations.