Twice Baked Potatoes is a favorite family side dish that never goes out of style.

Once or Twice Baked?

Baked Potatoes are a popular favorite but Twice Baked Potatoes are even better! They are a classic side dish, but what sets this recipe apart from the rest is that it has the creamiest fluffiest potato filling ever. You’re going to love them.

How do the potatoes become fluffy and creamy? Well, the answer is in how the potato is mashed before adding all the yummy ingredients like bacon and cheese. The best way to mash the potatoes is to use a kitchen tool called a ricer. This tool makes the potatoes super light and fluffy and doesn’t over mix the potato filling. You’ll still get great results by mashing the potatoes by hand but the ricer will make it so much easier (and did we say fluffier?).

How to Make Twice Baked Potatoes

Making Twice Baked potatoes is super easy. Basically you start by baking the potatoes like normal. But then, you scoop out the insides, mash them, and mix them with your favorite ingredients. Then the filling goes back in the potato and into the oven for the second bake of about 15 minutes.

The hardest part is figuring out what mix-ins you want to use. My vote is always for cheese, bacon, and sour cream which is what we’re showing in the recipe below but the options are endless. Maybe you want to try broccoli and cheddar, or spinach and artichoke? How about bacon, jalapeno, and cream cheese? Feel free to get creative and share your best results with us in the comments below. 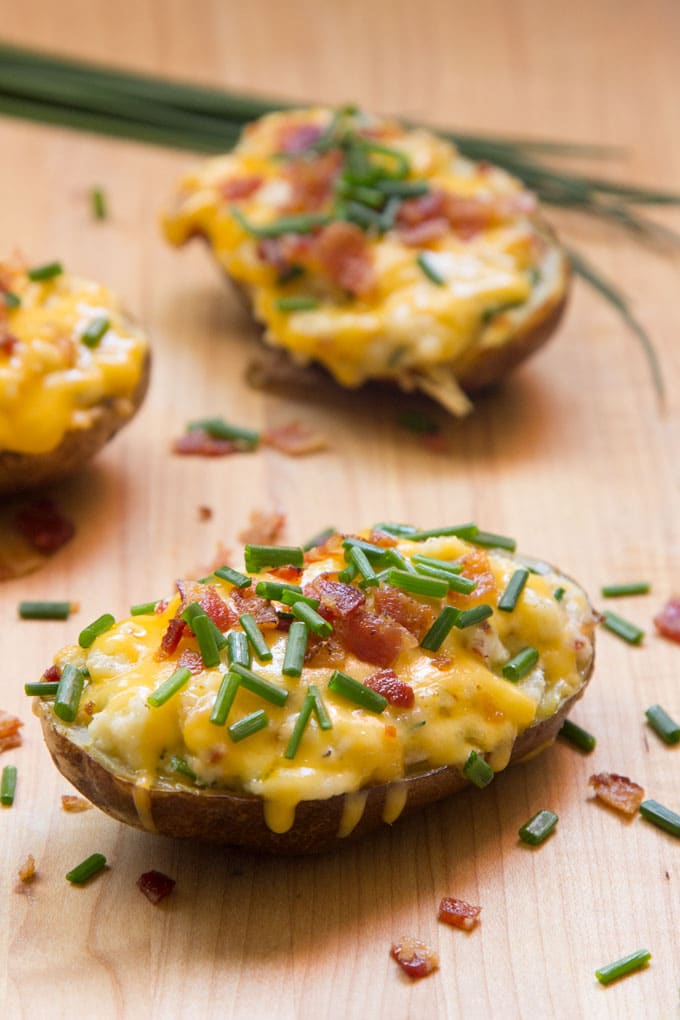 Michelle’s passion for food began when she started cooking dinner for her family at the age of 12. At first she couldn’t even roast a chicken, but practice makes perfect! Since then Michelle’s love of all things food has continued to grow so much that since college she’s worked professionally in the food world from running the Test Kitchen at Hungry-Girl.com and working behind the scenes of many Food Network shows. Michelle currently works professionally as a Food Stylist and blogs at Cup of Zest where she recreates vintage recipes for the modern lady.