Zucchini gratin is a layered casserole made with zucchini, tomatoes, a cream sauce, and cheese. This delicious side dish is a great way to use excess zucchini.

A gratin may sound like fancy French restaurant fare, but in fact, gratins are homey, rustic and surprisingly easy to prepare. In this recipe, zucchini is given the gratin treatment and the result is a colorful, vegetable-forward dish that can be either a perfect summer side or a light vegetarian main course.

A gratin is simply a type of casserole that is layered in a shallow dish, topped with bread crumbs, cheese or – in the best case scenario – both, and baked or broiled in the oven. The cheese and bread crumbs brown and crisp up in the heat of the oven giving the gratin its characteristic crunchy, golden brown top.

The most famous example of a gratin may be potatoes au gratin. In that indulgent dish, potatoes are sliced and covered with a cream sauce and cheese – lots of cheese! – before being baked in a hot oven. But, in truth, there are many different kinds of gratins out there and some you may not even recognize as a gratin.

For example, baked macaroni and cheese topped with bread crumbs is a type of gratin. Did that just blow your mind? And have you ever seen or eaten a dish called a vegetable tian? A tian is another French dish in which vegetables are thinly sliced, layered in a shallow baking vessel and topped with cheese or bread crumbs (or both!). So technically, a tian is a type of gratin as well.

But macaroni and cheese and potatoes au gratin aside, a gratin does not have to be heavy or hearty. Indeed, vegetable-forward gratins, such as this zucchini gratin, are perfect warm-weather fare, especially when using beautiful, in-season produce.

The base of this gratin is two kinds of summer squash: zucchini and yellow squash. You could certainly make this dish with just zucchini – if that is all you have on hand or you have an abundance of zucchini in your garden. But the addition of the yellow squash makes for an especially eye-catching presentation.

To the thinly sliced summer squashes, we add cherry tomatoes – for more color and some sweetness – and minced garlic for that classic French flavor. The vegetables are tossed with flour – which will then thicken the sauce as the dish bakes – and seasoned with salt and pepper.

The next step is to layer the vegetables in a shallow dish or pie plate and add a splash of heavy cream. (I said this dish was light and summery, but it is, after all, French. You have to have a little bit of cream, right?) The fact that the squash are thinly sliced and then placed in a shallow dish will allow them to become tender more quickly in the oven – resulting in less cooking time. That is the secret to the magic of the gratin!

The other must-have part of a gratin is the crunchy topping. In this case, the topping is a mixture of panko bread crumbs – which are especially light and crunchy – parmesan cheese and a bit of olive oil. This mixture is sprinkled over the vegetables right before they go in the oven.

About 20 minutes later, you will have a colorful, eye-catching dish of tender summer squashes coated in a thick, creamy sauce with a golden brown, crunchy topping. Doesn’t that sound divine? This gratin is certainly substantial enough to serve as a vegetarian main course, but it would also be a wonderful side dish for to accompany your favorite summertime chicken or fish recipes.

So if you are looking for ways to use zucchini – whether it comes from your garden, the farmers market or just the local grocery store – try this flavorful and quick-cooking gratin. 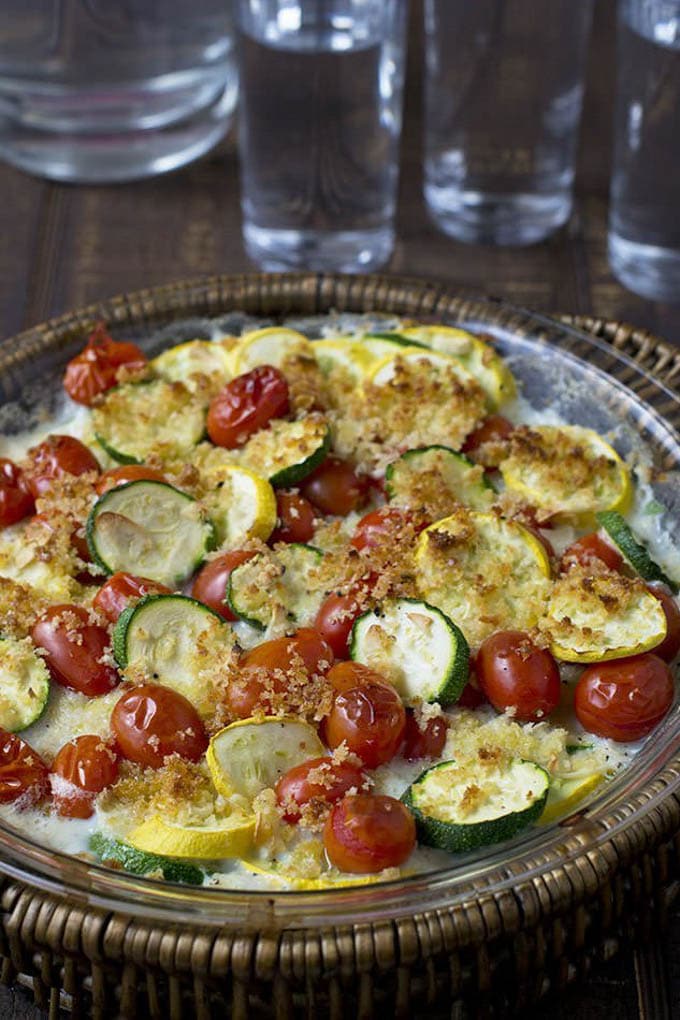 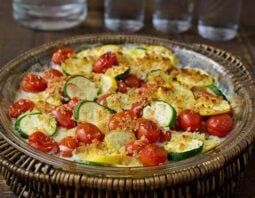 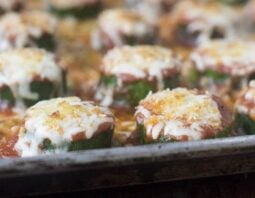