Mujadara is a delicious dish with lentils and rice that can be enjoyed as an entrée or side dish. Take the time to caramelize the onions – you won’t regret it!

An ancient dish enjoyed through the Middle East, mujadara is perfectly suited to contemporary diets. This naturally vegetarian and gluten-free combination of rice and lentils topped with caramelized onions works equally well as a meatless main course or as an accompaniment to grilled or roasted meats.

Lentils have been an important part of Middle Eastern cuisine since ancient times. Think about the Biblical story of Jacob and Esau. The dish that Esau traded to his brother in exchange for his birthright was a lentil stew. Did you know that? Indeed, lentils are mentioned four separate times in the Bible. That just shows how important these little pulses have been to humans for thousands of years!

The most iconic and beloved lentil dish throughout the Arab world is mujadara, which is sometimes written as mujadarra or mejadra. Mujadara combines gently spiced rice and lentils with sweet, caramelized onions and is often served with chopped fresh herbs and a generous dollop of thick, creamy yogurt.

As you might imagine, mujadara was once considered peasant food because it is made with such humble ingredients. It is still a very economical dish, but today, we know that mujadara is actually a terrific source of plant-based protein and offers excellent bang for your grocery buck.

In terms of versatility, mujadara can be both a satisfying one-dish main course or a versatile side. Indeed, if you are feeding a group that includes meat-eaters and vegetarians, a large pot of mujadara can serve both as the vegetarians’ main dish and as an accompaniment to any main dishes containing meat. Oh, and did I mention that mujadara is gluten-free? Yes, mujadara works for pretty much everyone.

For this iconic lentil dish, you want to select green or brown lentils that will hold their shape after cooking. Avoid red lentils which tends to break down and become thick like porridge.

How To Make Lentils and Rice with Caramelized Onions

To make mujadara, you first par-cook the lentils because they take longer to cook than the rice does. You can use water or broth for the cooking liquid, but do not use chicken broth if you are serving this dish to vegetarians. (If keeping this dish strictly vegetarian is not important to you, chicken broth is fine.) Once the lentils have cooked for about ten minutes, you add the rice and the two finish cooking together. That means only one dirty pot for you to clean.

Well, you actually have to use another pan to sauté the onions, but they are so important to the dish, you simply cannot skip them! The onions should be deeply caramelized to bring out their natural sweetness. This process can take as long as 30 minutes, so I suggest frying the onions while the lentils and rice are cooking to save time.

You can serve mujadara warm or at room temperature, which is very convenient. Indeed, in the Middle East, mujadara is considered a perfect food for picnics and potlucks because it can sit for hours without any ill effects. Some people say that mujadara only improves as it sits because the flavors blend together and continue to develop. So, if you are wondering whether you can prepare mujadara in advance, the answer is definitely yes!

However you choose to serve mujadara, I highly recommend garnishing the dish with a dollop of thick, creamy yogurt or, even better, cucumber tzatziki. Yogurt is such an important ingredient in Middle Eastern cuisine that almost no meal is complete without it! Here, the yogurt adds moisture and tanginess to the mujadara, which is, after all, a gently spiced, mild dish.

I hope that you are inspired to make this ancient and beloved lentil dish in your own kitchen. Mujadara is nutritious, comforting, economical and versatile – it doesn’t get much better than that! 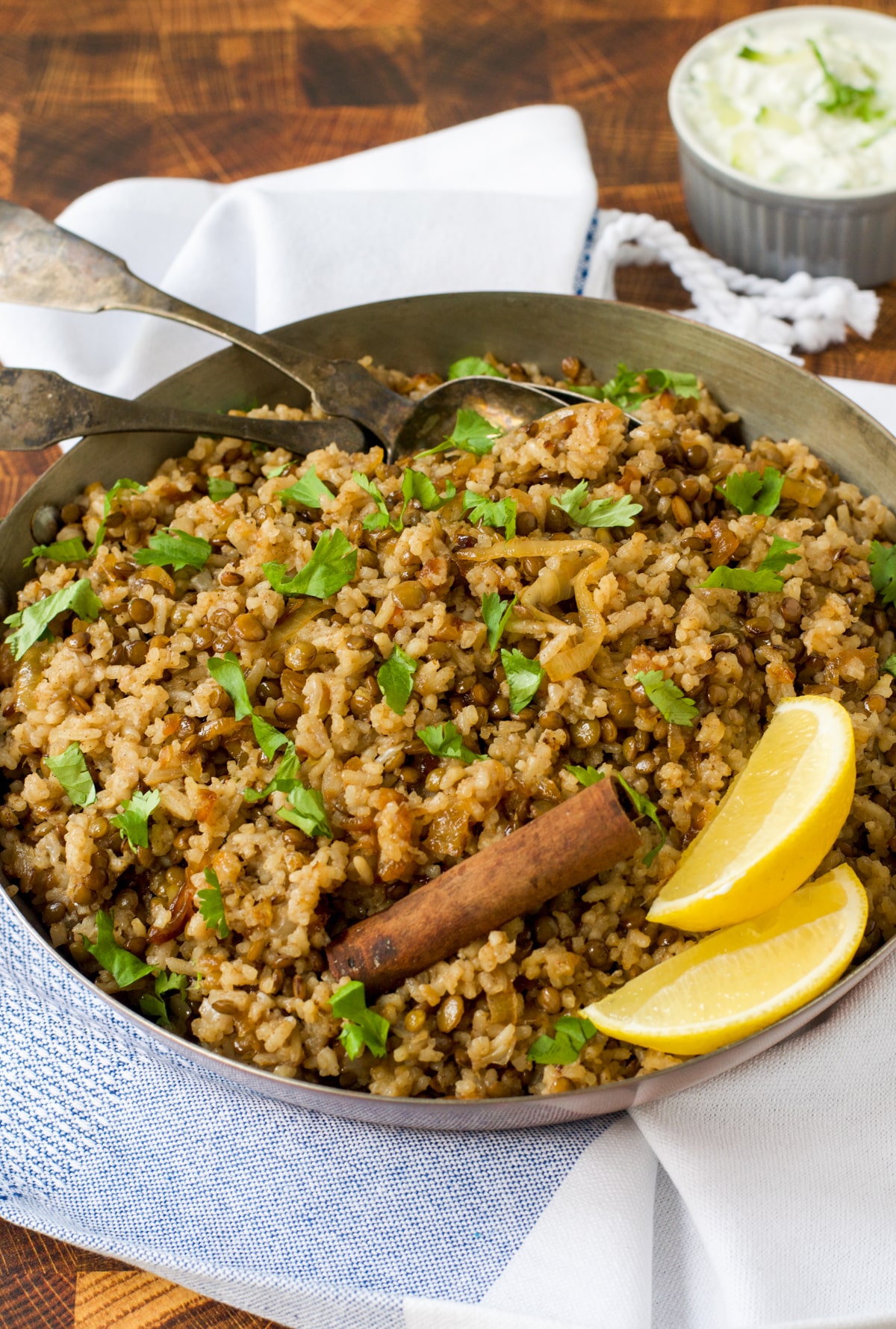 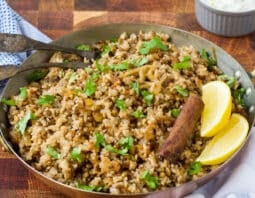 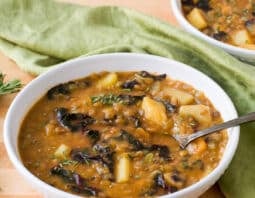