Cheese Blintzes are perfect for a special brunch and can be made in sweet or more savory versions.

If you are looking for a special dish for your next brunch party, consider cheese-filled blintzes. Topped with jam and seasonal fresh fruit, blintzes are a delightful vegetarian dish and a nice break from all the egg-based dishes that one typically sees at brunch. (Though if you want eggs, let me direct you to this Eggs Benedict.)

Blintzes are a sweet treat of thin pancakes, similar to a French crêpe. They are filled with soft, fresh cheese and rolled up like a little package. Once assembled, blintzes are usually fried in butter and topped with jam or sour cream and garnished with a dusting of powdered sugar and some fresh fruit.

Blintzes are a traditional dish for the late spring holiday of Shavuot, which commemorates the day God gave the Torah to the Jewish people at Mount Sinai. One of the most widely held customs for Shavuot is to celebrate by eating dairy foods, especially cheese. One of the reasons that blintzes in particular are a beloved Shavuot food – besides the fact that they are stuffed with cheese – is that two blintzes laid side-by-side resemble the two tablets Moses received on Mount Sinai. Isn’t that poetic?

How Do You Make Cheese Blintzes?

Jewish grandmothers would have you believe that making blintzes is an enormous production, but it is just not true. Blintzes are only a production if you insist on making them by the hundreds. Which, in their defense, many grandmothers used to do. But today’s cooks can simply make enough for brunch or dinner. This recipe makes 8 blintzes, which is just the right number to serve four people. If you are serving a larger group or want to make extra blintzes to freeze for another occasion, simply double the recipe.

Although blintzes are not difficult to make, there are several steps to the process. You have to 1) make the pancakes, 2) make the filling, and 3) fill and roll up the pancakes. Finally, the last step is to cook the filled blintzes after which they should be served right away. However, you can easily break the process up into steps and several of the steps can be completed in advance.

In fact, the batter for the pancakes needs to rest for at least two hours before cooking. As a result, I recommend making the batter the night before you plan to serve the blintzes, especially if you are serving them at brunch. The batter will keep in the refrigerator overnight and that is one less thing to worry about in the morning. You can also fill the blintzes in advance and keep the filled, uncooked blintzes in the refrigerator for a day or freeze them for longer storage.

Cooking the pancakes for the cheese blintzes is the step that most people find intimidating because the pancakes should be very thin – almost translucent. It does take some practice and the first pancake often comes out looking a bit wonky. It will still taste delicious! If you think that you will be making crêpes or blintzes regularly, I recommend investing in a nonstick crêpe pan which is like a nonstick skillet but with lower sides. A regular nonstick skillet will work, but it is harder to lift the thin pancakes out of those.

What Kind Of Cheese Is Used To Fill Blintzes?

Farmer’s cheese is quite tangy, which some people love, but others find it off-putting. Kids, I have learned, prefer the mild taste and smooth texture of fresh ricotta as a filling for blintzes.

In the recipe below, I give you instructions for both a traditional farmers’ cheese filling as well as a sweet ricotta filling that is a favorite with my family.

I hope that you will give these traditional cheese blintzes a try. They are a classic Jewish comfort food and a favorite with the whole family.

Note: Filled, uncooked blintzes can be frozen for up to 3 months. To freeze, spread the blintzes on a baking sheet and place in the freezer. Once frozen solid, they can be packed into a gallon-sized freezer bag for long-term storage. Allow the blintzes to thaw before frying them as described in Step 8 above. 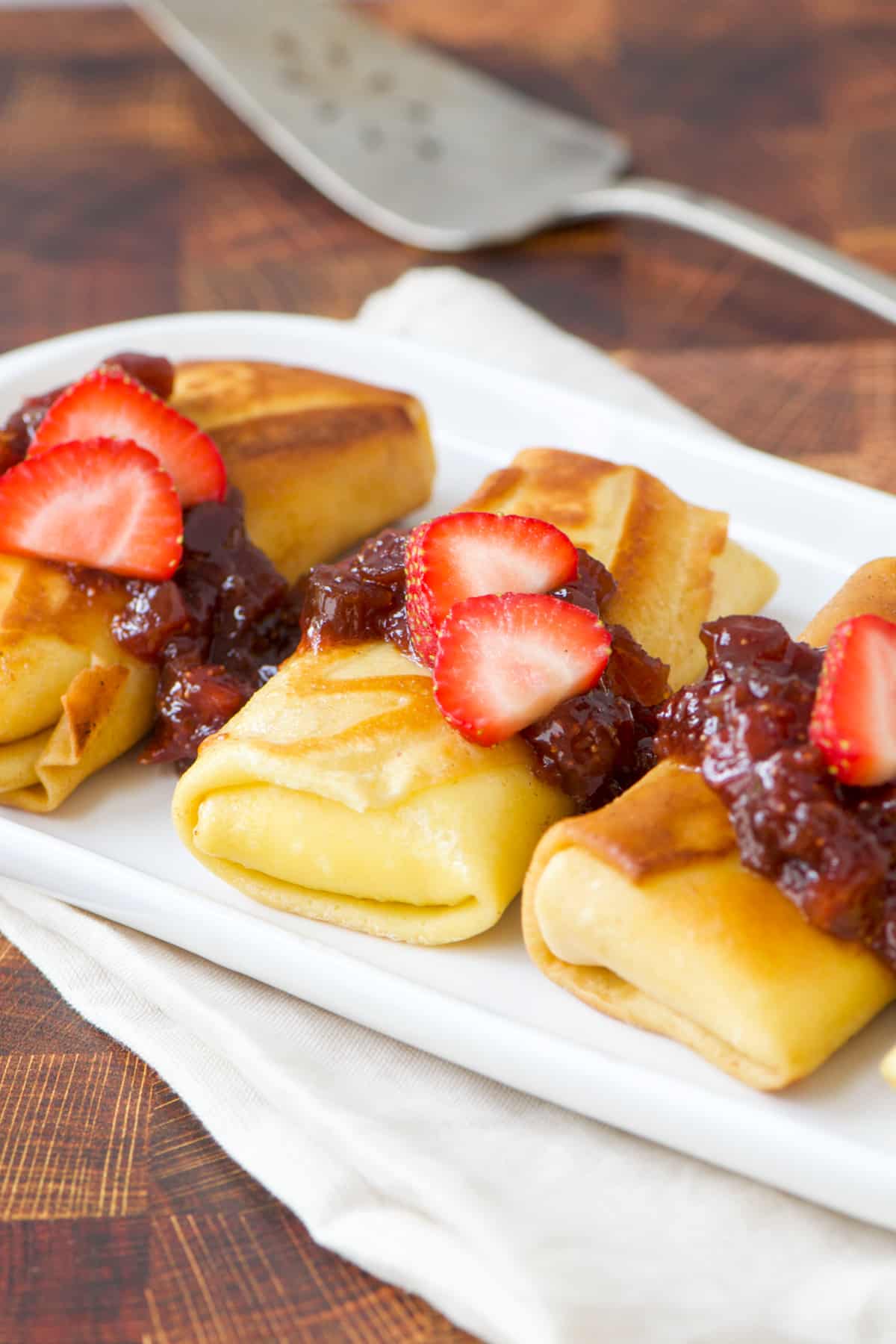