Tender, melt-in-your-mouth brisket is the perfect main course for a holiday celebration. Best of all? You can prepare it in advance!

For many Jewish families, the centerpiece of a holiday meal – be it Passover or Rosh Hashanah – is a braised beef brisket. This custom likely stems from a time when Jewish immigrant families were relatively poor because brisket was typically an inexpensive cut of meat.

But today, brisket is simply the traditional favorite for most holiday meals and everyone thinks that their mother, or grandmother, makes the best version. Indeed, there have been occasions when I tentatively suggest that maybe this year, I should make something other than brisket for a holiday meal and my family simply won’t hear of it!

There are several reasons, beyond tradition, why a braised brisket is an ideal main course for a holiday or when entertaining a crowd. First, not only is it possible to make brisket the day before you plan to serve it, it is preferable. I’ll explain more about that below. In addition, brisket remains a relatively inexpensive cut of beef, especially when compared to cuts like prime rib or beef tenderloin. So, if you are feeding a large group, serving brisket can save you quite a bit of money.

But regardless of such mundane considerations as price and convenience, brisket is a wonderful dish to serve on a holiday because it is true comfort food. Shreds of meat that melt in your mouth; winey, tomatoey gravy that soaks everything it touches – who can resist such a homey, satisfying dish? That is why brisket has remained a favorite Jewish holiday dish through the decades.

How To Best Cook A Brisket

A brisket comes from the working muscles of a cow and as a result, it is a tough cut of meat. But like all tough cuts of meat, brisket is exceptionally flavorful. The key to making sure that your brisket comes out melt-in-your-mouth tender, and not tough, is to braise it.

As a reminder, braising is a technique of cooking meat in two stages: first, you sear it, usually on the stove, and then second, you cook it in the oven, covered and surrounded by liquid, for several hours. This low-and-slow way of cooking makes cheap, tough cuts of meat turn out fork-tender and delicious. Plus, the cooking liquid becomes a flavorful gravy to serve alongside the meat.

In my recipe, I use red wine as the main cooking liquid for the brisket along with beef broth, ketchup – yes, ketchup! – and tomato paste. The acidity of the wine and the vinegar in the ketchup cut through the fattiness of the meat and the tomato paste adds tons of umami. It’s a winning combination!

Why Cook Brisket The Day Before?

In the case of brisket, the braising process takes several hours. This is one of the many reasons that I always cook my brisket the day before I intend to serve it and I recommend that you do the same. On the day of a special holiday meal, there is always so much to do – the last thing you need is to tie up your oven for three hours cooking the brisket.

Not only is it more convenient to cook your brisket on the day before you intend to serve it, the brisket actually turns out better if you cook it in advance. You’ll see this in other recipes that involve braising a beef as well, like this delicious short ribs recipe and this classic oxtail soup.

Why is this? Brisket is a fatty cut of meat. As a result, the liquid that the meat cooks in can end up being greasy. But, if you cook the meat the day before you plan to serve it, you will chill the sauce overnight and all the fat will congeal at the top. You can then easily remove the congealed fat and the remaining sauce will be rich and flavorful, but not greasy. Isn’t that clever?

Another advantage to cooking the brisket the day before and storing it in the refrigerator is that brisket is easier to slice when it is cold. What I usually do, and the recipe explains this, is cook the brisket a day – or at most two days – before I intend to serve it. I then refrigerate the meat in one container and the sauce in a separate container.

The following day, I remove the congealed fat from the sauce, as I explain above. And I slice the brisket while it is still cold. (For best results, use a sharp carving knife and slice the meat thinly across the grain.) Then, I place the sliced brisket in a baking dish, cover it with the sauce and place the dish in the oven to reheat for forty-five minutes to an hour prior to serving. It’s so easy and the resulting dish is tender, flavorful and not one bit greasy!

If you have never had brisket prepared this way, I highly recommend that you give it a try on your next special occasion. I bet your family will love it just as much as mine does. 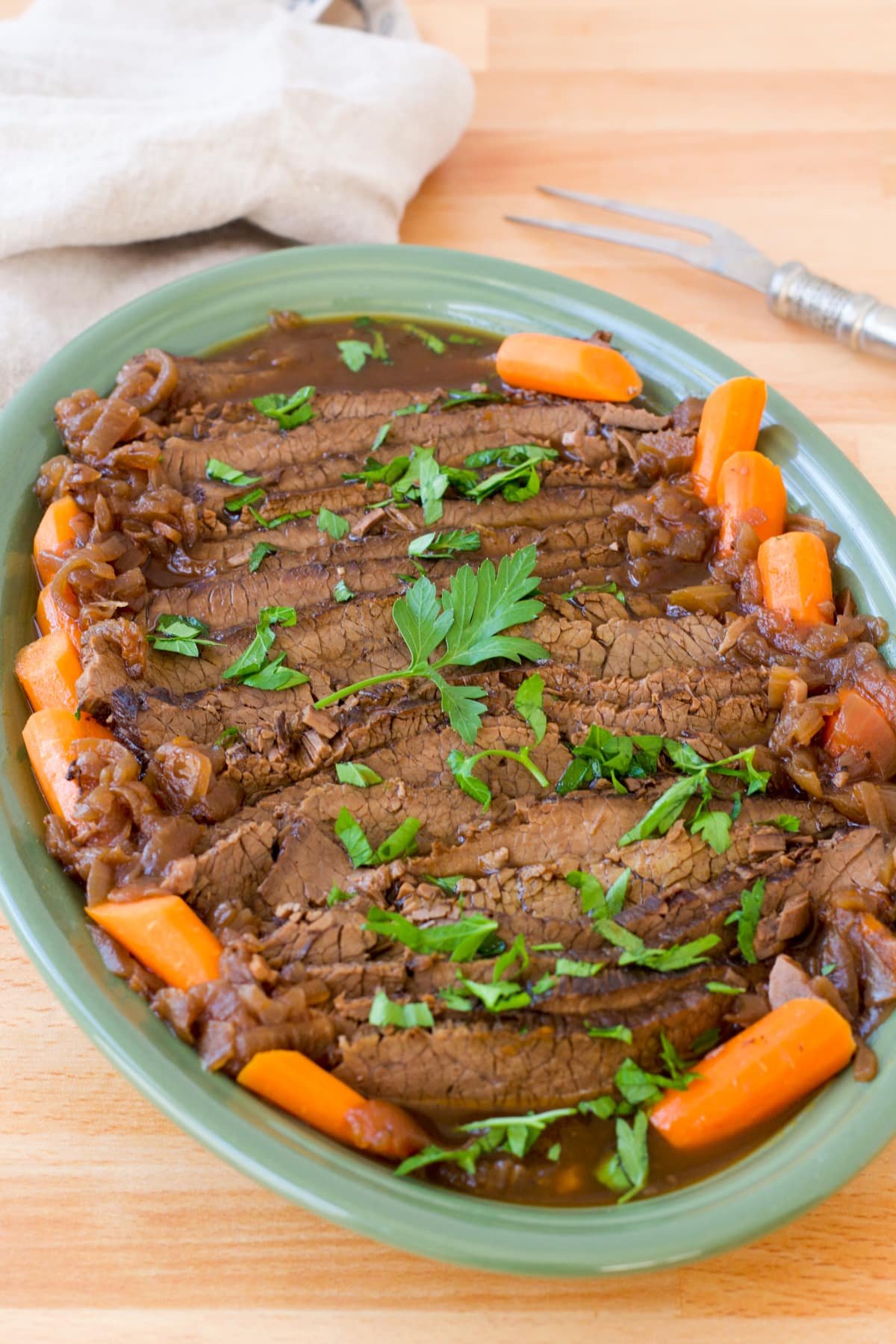