Learn to make rugelach, a delicate flaky cookie filled with jam, nuts and dried fruit. This is one of the most beloved desserts in all of Jewish cuisine whether you are from Europe, America, or Israel.

Rugelach are a traditional Jewish cookie that has crossed over into the mainstream of baked goods. You probably have seen them before in bakeries or at a holiday cookie exchange. Typically these cookies look like little crescents made by rolling up a triangle of dough that is filled with jam, dried fruit, and nuts. However, it is also common to see rugelach that are round and rolled up like a spiral.

Rugelach means “little twists” in Yiddish. It originally came from eastern Europe, where they were made with an eggy, yeasted dough. Interestingly, in Israel, rugelach continue to be made with a yeast-risen dough in the European tradition.

What Kind Of Dough Does This Rugelach Recipe Use?

Rugelach dough made with cream cheese – for extra tenderness – is an American adaptation of this centuries-old cookie. Kraft began selling cream cheese in the late 1920’s and it caught on quickly as more and more homes became equipped with early refrigerators known as iceboxes. During the Great Depression, cream cheese became even more popular as it was a source of inexpensive calories for many people.

At the 1939 World’s Fair, Kraft handed out small cookbooks full of recipes incorporating cream cheese as a way to promote the product. After that, Jewish bakers embraced the mild, creamy spread. Rugelach made with a cream cheese dough began appearing in American Jewish bakeries and cookbooks in the 1940’s and the cookie just took off from there.

Rugelach dough bears some resemblance to pie dough in that it is a short dough. This means that it has a high proportion of fat to flour, the fat here being the butter and cream cheese. Short doughs are designed to be flaky, tender, and crumbly. As when making pie dough, you want to keep the fat in this dough cold and leave small pieces of the fat intact to ensure a flaky dough. I find that the food processor is the best tool to incorporate the fat into the dough. You could also use a pastry cutter or two knives.

How Long Does Rugelach Dough Need To Chill?

It is important to chill the dough before rolling it out to allow the gluten in the flour to relax. You need to chill the dough for at least a few hours but overnight is better. This is nice because you can spread out the work of making the cookies over a few days.

You can even make the rugelach dough a few weeks in advance and freeze it until needed. This is really handy during the holiday baking season! Just let the dough thaw in the refrigerator overnight before proceeding.

Once the dough has had time to chill, you then roll it into a circle to make crescent-shaped cookies or a rectangle for rolled cookies. Crescent shapes are the most traditional type of rugelach, but it can be time-consuming to roll up each cookie. To save time, you can also roll the dough into a log and slice it into cookies, which is especially helpful when making large batches. (Indeed, this recipe can easily be doubled if baking for a large crowd or gifting.) I give you instructions for both shapes below in the recipe card.

What Fillings Do I Use?

Once you roll out the rugelach dough into your preferred shape, it is time to add the fillings. As I mentioned, it is traditional to spread the dough with jam and then sprinkle chopped nuts, dried fruits, or mini chocolate chips over the jam. It is really fun to come up with your own combinations of jam, fruit, and nuts.

But use your imagination! You can also replace the jam with a chocolate spread like Nutella.

If you are using a jam that has large chunks of fruit, you may want to purée it first in a food processor so it will spread more evenly. Or simply make sure the fruit pieces are evenly dispersed on the surface of the dough. Please note also that if you may have nut allergies in your family, as I do, green pumpkin seeds, known as pepitas, are a good substitute for nuts. Just toast them lightly and chop them into small pieces for sprinkling on the dough.

You can even experiment with savory rugelach. Just omit the orange zest and cinnamon from the dough recipe and fill the cookies with grated cheese and toasted nuts for a delicious little bite to serve with drinks.

Once the cookies are filled and shaped, it is a good idea to chill them once again before baking to ensure that they hold their shape in the oven. Twenty to thirty minutes should do the trick.

Lastly, give the cookies a brush with egg wash for a beautiful golden finish and sprinkle them with cinnamon sugar or a coarse sugar like Turbinado. They will bake at 350°F. The crescent shape cookies only take 15 to 20 minutes in the oven, but the rolled log cookies take about twice that, so just plan ahead.

Sadly, rugelach are just one of those cookies that taste the best the day they are made. The dough is at its most flaky and crispy during the first few hours after the cookies are baked. That being said, they still taste pretty darn good after a day or two and even longer if stored in the refrigerator. But if you are serving rugelach to guests or at an event, try to bake and serve them in the same day.

If you have ever enjoyed rugelach at a bakery or a friend’s home, I really hope that you will try baking these cookies yourself. If you happen to make your own jams and fruit spread, these cookies are a wonderful vehicle to showcase homemade jams. 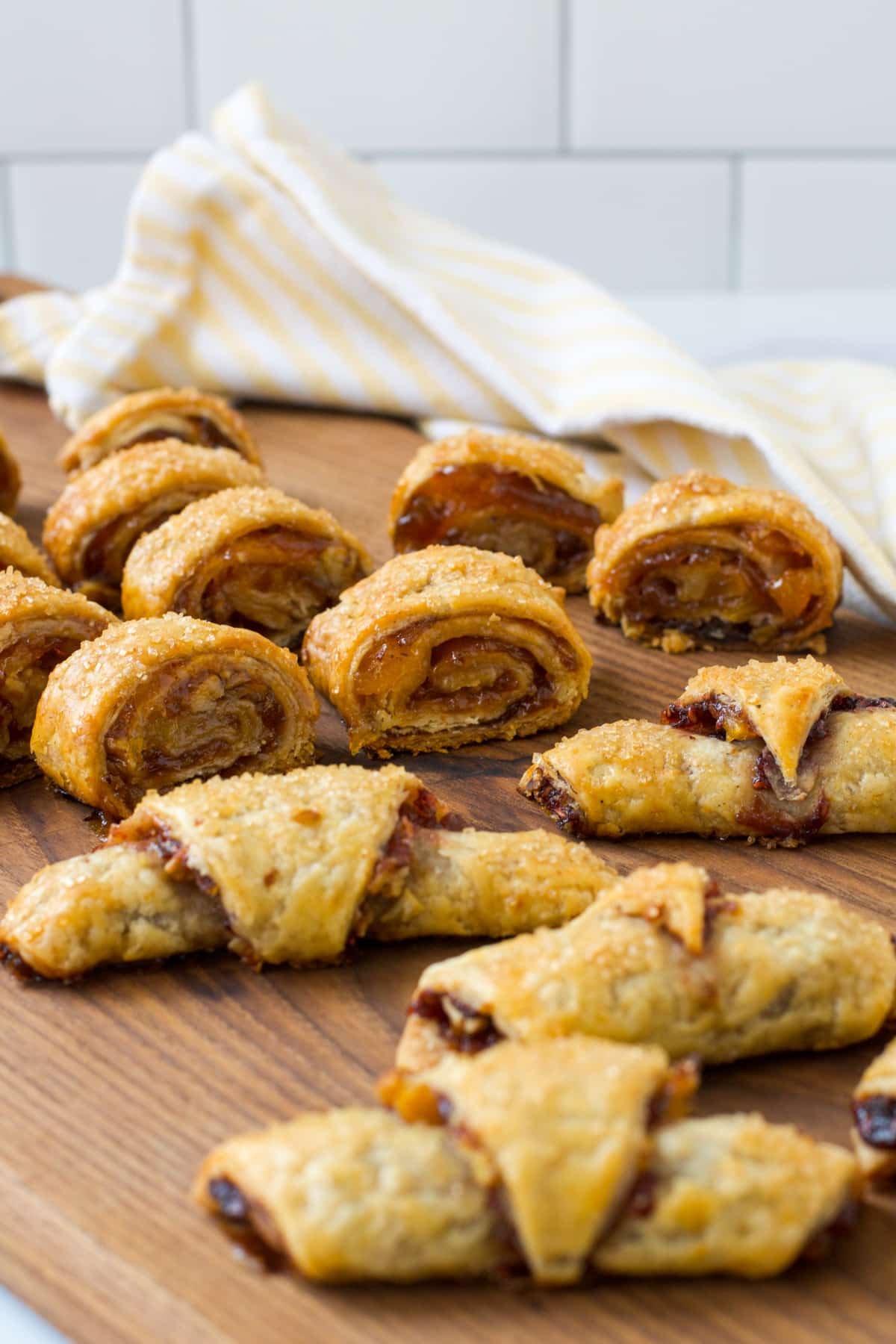