Learn to make potato knishes, that favorite Jewish deli snack, at home. While this recipe is a bit of a project, you can make all of the elements in advance and spread out the work over a few days.

If Jewish food has a reputation for being heavy, it is probably because of dishes like the potato knish. For the uninitiated, a potato knish is savory baked dumpling that consists of pastry wrapped around a mashed potato filling. In other words, a knish is not for anyone avoiding carbs! But they are certainly are delicious.

Like many classic Jewish deli foods, the knish is an American invention. It was not something people ate back in eastern Europe or Russia – the places where many Jews emigrated from. Rather, the knish is a food that was invented in the delis of New York City as an inexpensive yet filling food for workers to eat on the go.

The most traditional fillings for knishes are potato, obviously, and also kasha, which is a type of porridge made from buckwheat groats. But more modern versions can also include broccoli, spinach, or mushroom. I have even seen pizza-flavored knishes! You can also find sweet knishes that are filled with fruit and a soft, mild cheese.

A hundred years ago, there were many shops and even pushcarts selling knishes all over New York City, especially the Lower East Side of Manhattan and Brooklyn. Today, hot dog carts and other street food vendors in New York are no longer permitted to sell knishes and many of the famous knisheries have closed their doors, making a good knish much harder to find than it used to be.

One iconic knish store that remains open, and is worth a visit the next time you are in New York City, is the Yonah Schimmel Knish Bakery on the Lower East Side. It has been in the same location since 1910! You can even order these massive knishes for nationwide delivery through Goldbelly.

How To Make Your Own Potato Knish

But assuming you can’t get to New York anytime soon – and don’t want to pay Goldbelly prices – your best bet is to make your own knishes, and it is surprisingly easy to do so. The dough for the pastry shell is simple to make and is quite forgiving to work with. The most important thing to know is that after you make the dough, you need to let it rest for at least an hour before rolling it out. You can also prepare it in advance and refrigerate it until needed.

Making the potato filling is a bit time-consuming, but as I mentioned, you can also prepare it in advance, which spreads out the work. The filling requires two main ingredients: mashed potato and caramelized onion, which provides most of the flavor as well as a hint of sweetness. It is best to use starchy Russet or baking potatoes for the mashed potatoes and cook them in boiling salted water until tender enough to mash.

For the caramelized onions, regular yellow onions work perfectly. The trickier question is which fat you want to use to sauté the onions. The most traditional fat would be schmaltz, which is rendered chicken fat. It adds amazing flavor to the onions, but it may be hard to find. And using schmaltz means that your knishes will not be suitable for vegetarians. If you have a hard time finding schmaltz, or prefer a vegetarian knish, you can use butter or a neutral-flavored oil, like vegetable or canola oil, which has the added benefit of keeping the knishes dairy-free.

How To Form Knishes

Knishes come in many shapes and sizes. Sometimes they are thin and square – although this variety of knish is usually fried, not baked. Sometimes they are round with the pastry covering the filling completely. The knishes that I grew up eating, however, were round with an opening at the top that allows the filling to peek through. This is the classic Jewish deli style, so that is my preference.

To form the knishes, you first roll out the rested dough until it is quite thin and in the shape of a rectangle. Then, you place the filling near the bottom edge of the dough in the shape of a log and roll it up so that there are several layers of the dough wrapped around the filling. Next, you cut the dough log into pieces to form the individual knishes. At this point, the knishes will be open on the top and bottom. You can leave them like this or, if you prefer, you can stretch the dough to cover one end, which will become the bottom of the knish – leaving the top open to expose the filling within.

Lastly the knishes are given a brushing of egg wash to ensure a nice golden finish and baked in the oven. If time permits, I recommend chilling the formed knishes prior to baking. The mashed potato filling expands when baked and this can cause the dough to split open. Chilling the formed knishes helps minimize cracking and splitting. Alternatively, try to roll the dough loosely around the filling leaving some room for the filling to expand. (If your knishes do split open, do not worry. They will still taste amazing.)

Knishes are best served warm with a generous dollop of spicy brown mustard. The classic thing to drink with a potato knish is a glass of buttermilk or kefir, which is a kind of drinkable yogurt. The tanginess of these dairy-based liquids cuts through the richness of the knish and provides some much-needed acidity. My husband, who grew up going to the famous and sadly defunct Mrs. Stahl’s Knishes in Brooklyn, swears by the knish-buttermilk combination. Give it a try!

While knishes are typically thought of as a snack, they are certainly substantial enough to serve as a meal. I especially like to serve knishes at brunch. Or try them as a side dish for brisket or roast chicken. Any leftover knishes – because it is hard to eat more than one at a time – can be stored in the refrigerator and reheated in a 350 degree oven until warmed through.

*Note: Schmaltz, which is simply rendered chicken fat, is a traditional ingredient in eastern European Jewish cooking. You can make your own or look for it at gourmet markets or grocery stores, where it is sometimes sold frozen. You can also substitute duck fat if that is easier to find. Using schmaltz will prevent this dish from being meatless. To keep the dish vegetarian, use butter and for a dairy-free version, use oil. 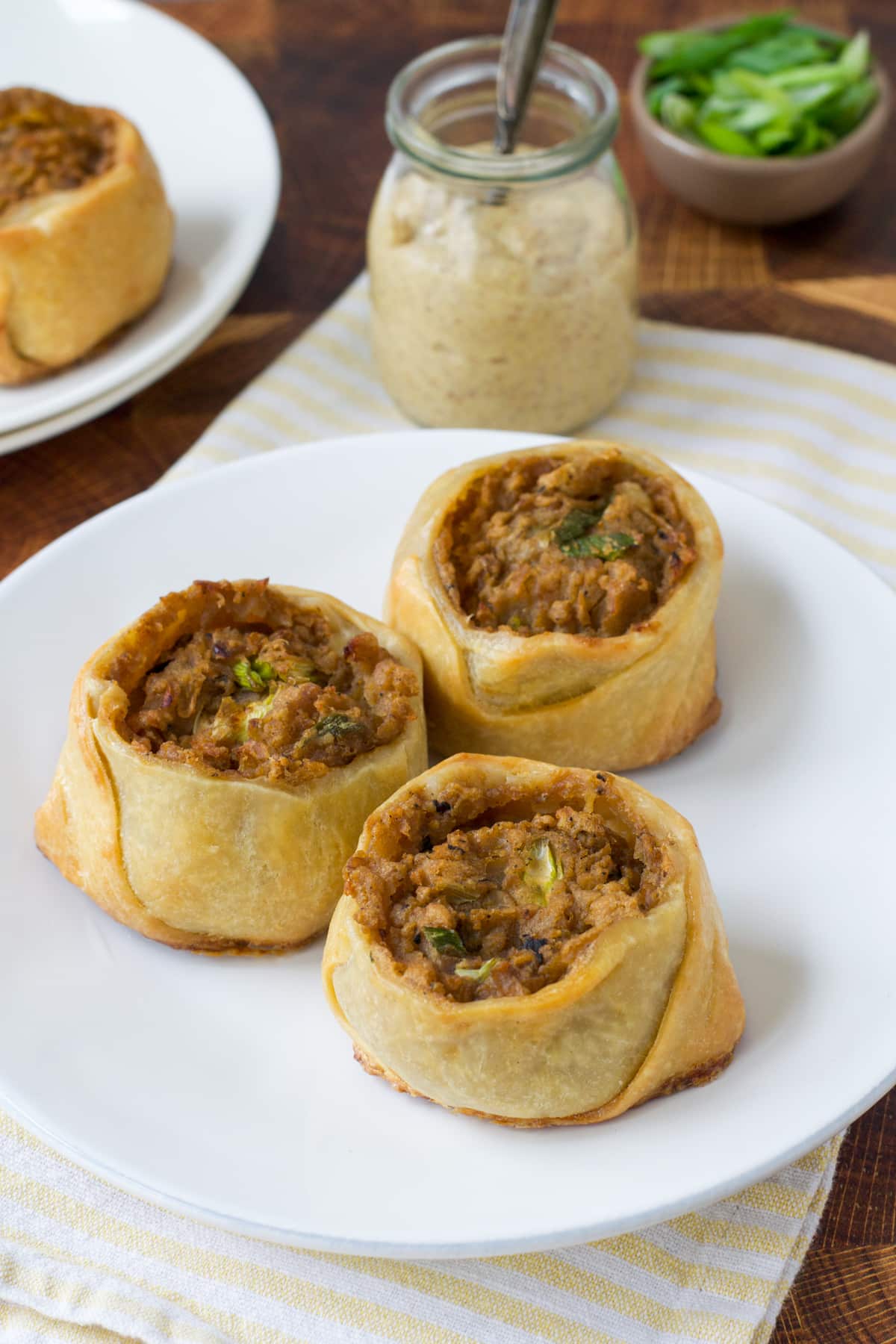