These quick Air Fryer Mozzarella Sticks are crunchy on the outside and full of melted cheese. And, they’re ready from start to finish in only 10 minutes!

Recently we shared a recipe for Air Fryer Mozzarella Sticks. These are really tasty and they are actually fairly easy to make. However, they’re time-consuming and a tad annoying because you have to freeze them after breading them.

Why do you have to freeze them? So that the cheese doesn’t melt and ooze out before the breading browns.

So one day I was craving mozzarella sticks but I didn’t want to wait all that long. I happened to have some egg roll wrappers in my fridge and I decided to try wrapping cheese in those. It worked!

I just took a stick of string cheese, wrapped it in an egg roll wrapper, lightly oiled the outside, and put it into the air fryer for 6 minutes. The wrapper was crunchy and golden and the cheese inside was melted. The whole experiment took 10 minutes tops. I was delighted!

I know you are probably wondering if any cheese leaks out during cooking. The answer is yes. When I make a batch of 6 cheese sticks, usually 2 have some cheese coming out of one end. However, it seems to just leak a little bit at that end and the rest of the cheese stick is still full of cheese. So it doesn’t seem to matter that much.

As to clean up, my air fryer is non-stick so the melted cheese just wipes right off.

If you want your cheese sticks to leak even less though, you can do an extra step that isn’t in the recipe. What you do is whisk together an egg with 1 tablespoon of water. Then, when the recipe says to moisten the edges of the egg roll wrapper, use that egg mixture instead of the water.

I have a tutorial over here for how to roll egg rolls. You can use that or just have a look at this image here which shows everything you need to know:

One more thing to note, I don’t do more than 6 at a time because more doesn’t seem to work well. With 6 they all end up brown and crunchy. When I’ve tried 8, even though they fit, they are a bit soft in places, but too brown in other places to make me want to cook them for longer. So just do 6 at a time.

The only thing left to say is that you need to serve these babies with a dip. A little bit of plain marinara sauce heated a bit in the microwave would be super traditional. If you want to try something amazing though, go for this Sriracha Mayo. It’s soooo good with the mozza sticks!

OK, let’s get going on making these crunchy bits of cheese heaven. Yeah! 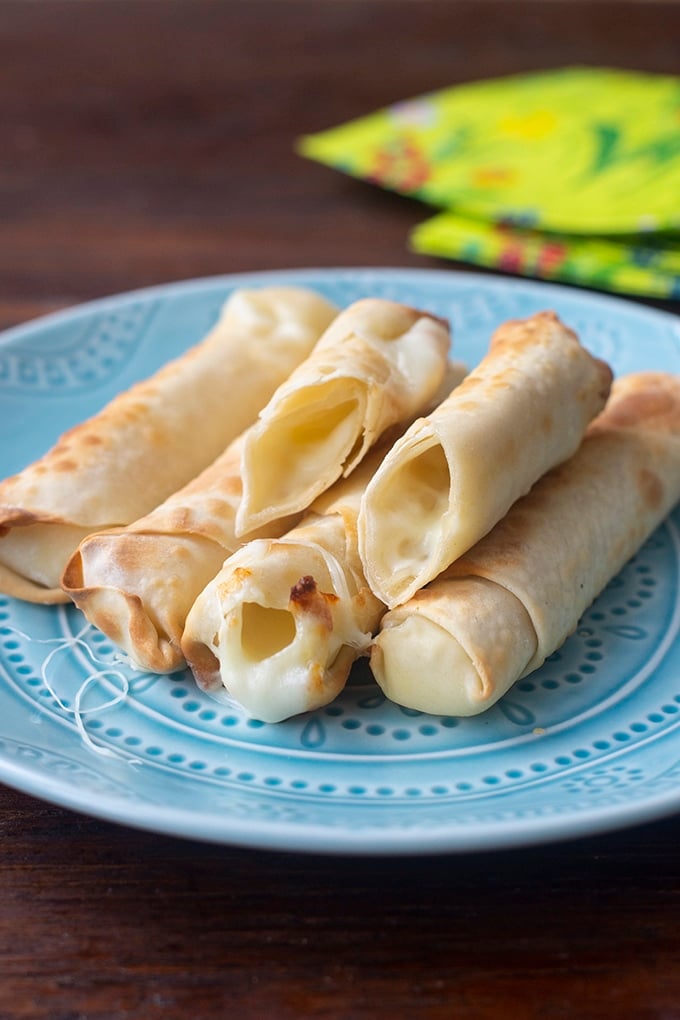