Home > Ingredient > Vegetables > Mushrooms > How to Use Dried Mushrooms

Dried mushrooms are a handy and flavorful ingredient to have in your pantry.

Dried mushrooms can literally transform a couple of regular ingredients into brilliance. For instance, if you have dried mushrooms and rice, you can make a delicious mushroom risotto. And there’s nothing like a pasta sauce made from dried mushrooms. They’re super versatile and are wonderful in all kinds of sauces, soups, and stews.

Not only are the mushrooms themselves flavorful, but you need to soak the mushrooms before using them and the soaking liquid is truly an unbelievable thing. It has all this earthy umami flavor. It is so good that I have never once thrown it away. I’d drink it straight up before doing that!

While dried mushrooms are very versatile, there are a few steps to getting them ready to use. The steps for soaking and draining dried mushrooms are below. First, I’m answering a few questions that I have been asked about this wonderful ingredient before.

Which Kinds Of Dried Mushrooms To Buy

My favorite kind of dried mushroom is porcini. It has so much real mushroomy flavor and the liquid you get from soaking them is delicious too.

Morels are my second choice.

The only other kind that my store typically has is chanterelles and I haven’t had much success with those.

I have also had great success with dried shiitake mushrooms. I find these at a local Asian market. They can come in large quantities but this doesn’t bother me since it’s great to have a big bag of dried mushrooms in the house.

How Long Do Dried Mushrooms Keep?

Dried mushrooms should be stored in a dark cool place (like a pantry). They will last with full flavor for 6-12 months. After that, they will still be edible for another year, but their flavor diminishes the longer they’re on the shelf.

Once you have rehydrated dried mushrooms, try to use them immediately. That’s when they’re at their best. But after you soak them, you can store them in an airtight container in the fridge for 1-2 days.

The water used to rehydrate mushrooms can also be stored in an airtight container in the fridge for 4-6 days.

How To Substitute Dried Mushrooms For Fresh Mushrooms

I have seen lots of people online offering conversion amounts for substituting dried mushrooms in for fresh. However, I find dried and fresh mushrooms to have different flavor and texture from each other. That means that if you substitute them, it will not taste or feel the same.

Dried mushrooms tend to have an earthier and stronger flavor than fresh mushrooms. They’re also more wet. They are similar to sautéed fresh mushrooms but with more flavor and a bit more moist. Some might call them slimy.

For the above reason, I tend to use fresh mushrooms and then add in some rehydrated dried mushrooms for an extra boost of flavor. Using both kinds, like I do in my Creamy Mushroom Sauce recipe gives the best of both kinds of mushrooms.

Having said that, if you find yourself wanting to make a recipe that calls for fresh mushrooms but all you have is dried, you can do this substitution:

Do You Need to Cook Dried Mushrooms?

Yes. You will soak the mushrooms as explained below. After that, the mushrooms need to be cooked. You can sauté them or simmer them in a liquid.

How to Prepare Dried Mushrooms for Cooking

Now that we’ve had some of our dried mushroom questions answered, we can move onto the important part of rehydrating the mushrooms.

Let mushrooms sit in the water for 30 minutes. The mushrooms float a little bit so they won’t seem completely submerged. That is alright. Just stir them every now and then.

Next you need to strain the mushrooms. The general recommendation is to strain them through a coffee filter, paper towel, or cheese cloth. The reason is that there is often a fine mushroom dust on the dried mushrooms and it can be gritty. You want to remove that.

To strain the mushrooms, line a fine mesh sieve with the filter, towel, or cheesecloth. Put a bowl under the sieve so you catch all the tasty juices! Then pour the mushrooms and the liquid through the lined sieve.

Now, that is the usual instruction. I often find that the mushroom liquid doesn’t have that much grit and that this step is a bit fussy. Sometimes it even takes forever for the liquid to drain through. The coffee filter is the worst in that way for me, while the paper towel absorbs some of the liquid, and the cheesecloth isn’t something I always have on hand. I therefore just use the sieve without lining it. If you try that and there is grit, you can always run it through the paper afterwards.

After you have strained the mushrooms, rinse them under cold water. This removes any grit that is clinging to the mushrooms. Then I usually roughly chop them. This is because the rehydrated mushrooms can be a bit slimy and I find it best to have small pieces so you don’t end up with a large slimy bit in your mouth ever.

Once the mushrooms have been soaked, strained, rinsed, and chopped, you can cook them. I typically sauté them in butter or olive oil. Or I add them to already sautéed fresh mushrooms, and then sauté them for a bit longer.

As to the liquid, what I usually do is add it to the sautéed mushrooms. Keep the heat on under the skillet and let the mushroom liquid mostly evaporate leaving behind an intense mushroom broth.

I hope you now feel more confident about using dried mushrooms. They are such a great thing to have on hand in your pantry.

This post originally appeared in October 2020 and was revised and republished in November 2022. 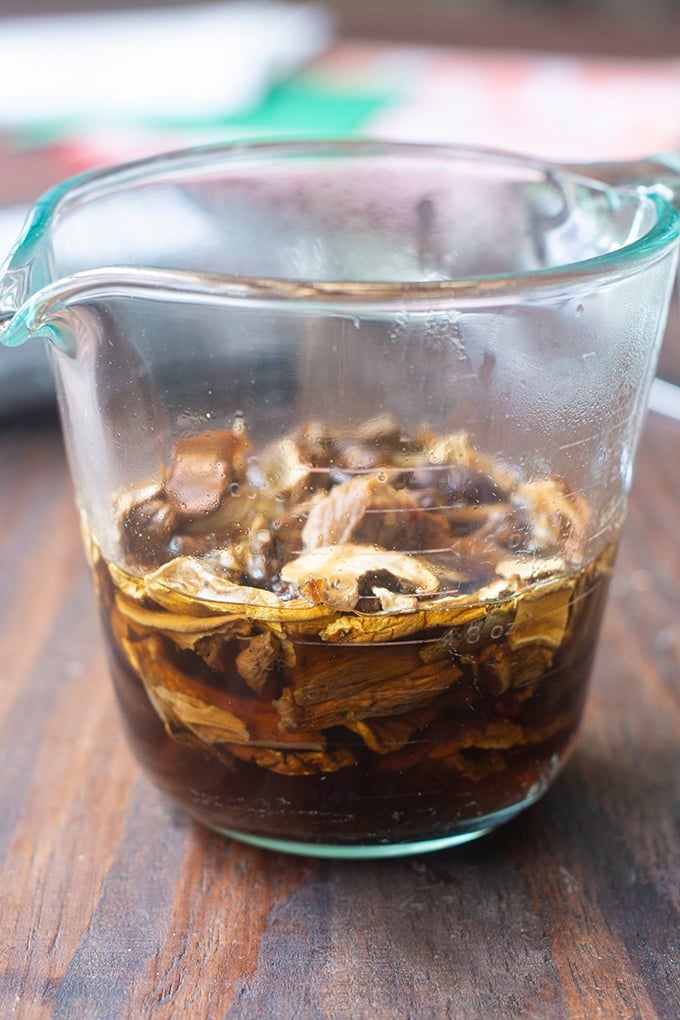 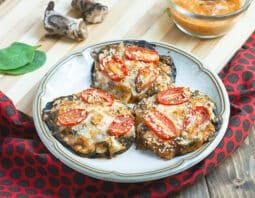 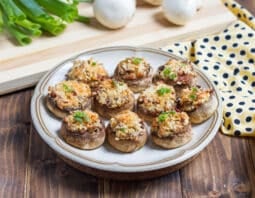 with Cream Cheese and Bacon