Instant Pot Lamb Shanks take a fraction of the time to cook as making them on the stove. The result is juicy fall-off-the-bone lamb without watching the stove.

Lamb shanks have become a trendy restaurant dish as of late, but there is no need to leave the house to enjoy this flavorful, inexpensive cut of meat. Lamb shanks are easy to cook at home and the presentation of the meat on the bone looks really fancy.

It used to take hours of long, slow cooking to turn tough lamb shanks into juicy, succulent meat that practically falls off the bone, but the Instant Pot gets the job done in a fraction of the time it would take on the stovetop. This is exactly the kind of recipe that the Instant Pot was made for. If you don’t have an Instant Pot yet, no worries, we’ve got you covered with how to make them the traditional way too.

What Are Lamb Shanks?

The lamb shank is the lower part of the animal’s leg. You may be familiar with leg of lamb – on the bone or boneless – which is a pricey and especially tender cut of meat. Leg of lamb comes from the upper part of the lamb’s back legs. Be sure to check out my recipes for both Boneless Leg of Lamb and Bone-In Leg of Lamb.

The shank, by contrast, is the lower part of the leg and can come from either the front or the hind legs. Lamb shanks are much less expensive than leg of lamb and can be tough unless you know how to cook them properly.

How To Cook Them

Economical, tough cuts of meat, such as lamb shanks, benefit from long-slow cooking in liquid – a technique known as braising. When cooked this way, the flavorful meat will become tender, and it will contribute a rich, meaty flavor and luscious texture to the cooking liquid, which you can turn into a sauce to accompany the meat.

Traditionally, to cook lamb shanks, you begin by browning the meat on all sides in a wide, deep pot or Dutch oven with a tight-fitting lid. Then you remove the meat and sauté some aromatics, like onion, carrot and celery. After sautéing the aromatics, you add a cooking liquid, such as red wine or beef broth, and return the meat to the pot.

The lamb shanks would then be braised, in the covered pot, on the stovetop or in the oven for two to three hours. While this traditional method is very hands-off, it still takes several hours for the meat to become falling-off-the-bone tender.

The Instant Pot speeds up this process considerably, making lamb shanks accessible for even a busy weeknight dinner. The Instant Pot method is very similar to the traditional stovetop approach. (If you don’t have an Instant Pot, we recommend this one.)

Begin by browning the meat on all sides – don’t skip this step because it adds a lot of flavor. Then you sauté the aromatics, add the cooking liquid, and return the lamb shanks to the Instant Pot. Cook at high pressure for a mere 40 minutes and voilà! Lamb shanks in half the time.

The Secret To The Sauce: Remove The Fat

The key to making this braise lick-the-spoon delicious, whether you are cooking the lamb shanks on the stovetop or in the Instant Pot, is to remove the grease from the cooking liquid so that you can turn it into a rich flavorful sauce for the meat. I suggest a few different ways to do this in the recipe, but a fat separator makes it especially easy. (This is the one we love.)

To remove the fat from the sauce with a fat separator, simply transfer the cooking liquid to the separator. The fat will naturally rise to the top. Pour the liquid from the bottom of the fat separator, leaving the grease behind.

This liquid can then be reduced and thickened into a sauce to accompany your lamb shanks. Be sure to serve some couscous, rice, or the Best Mashed Potatoes on the side for soaking up all that delicious sauce.

Can You Make These In Advance?

Yes! Like many stews and braises, lamb shanks can be prepared a day in advance, which is helpful if making them for a special occasion. If preparing these the day before you plan to serve them, follow the recipe through step 6. After removing the lamb shanks from the Instant Pot and straining the sauce, transfer the meat and sauce into separate containers and refrigerate both. The fat in the sauce will congeal as it chills and you can then easily remove and discard it.

To reheat prior to serving, place the sauce and the lamb shanks in a large saucepan or Dutch oven and add the dried fruit. Cook, covered, over medium heat until the meat is heated through. Then remove the cover and simmer the sauce until slightly reduced and thickened. You should not need the corn starch slurry if reheating the lamb shanks on the stove.

These North African-inspired lamb shanks with dried fruit are an impressive dish suitable for company or even a holiday celebration, but the Instant Pot makes them easy enough to prepare any night of the week.

*Fat naturally rises to the top and sits above the liquid so you can skim it off with a spoon or use a fat separator (we love this one). 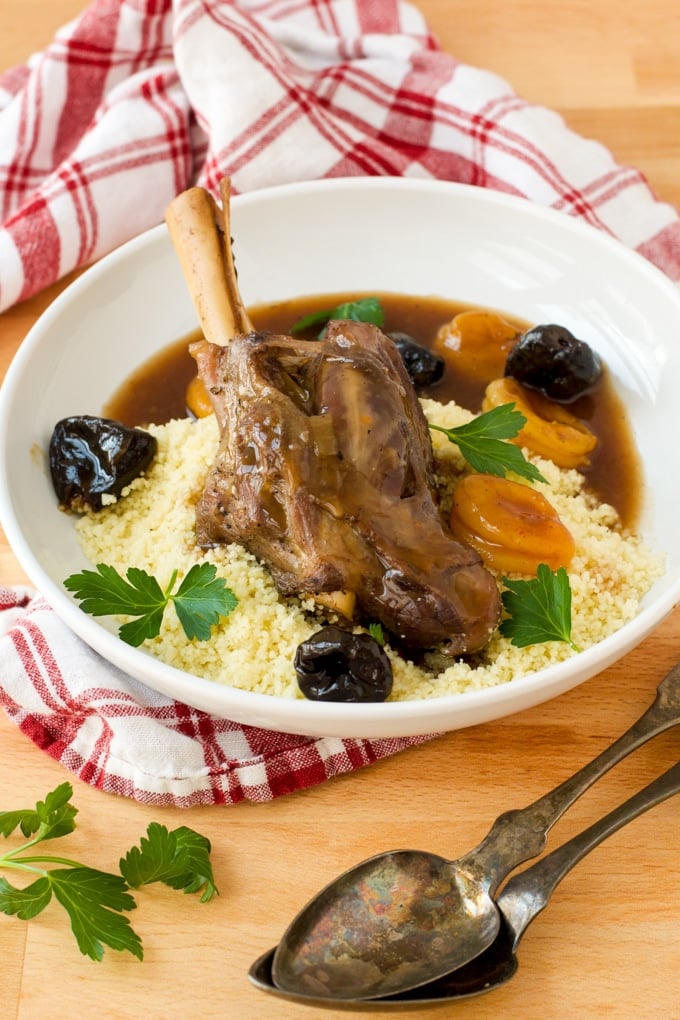 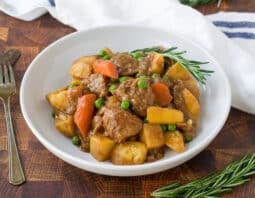 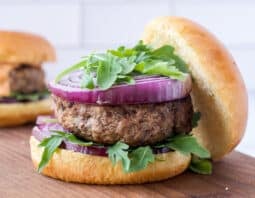